Restoring open forests and grasslands in the East Kootenay 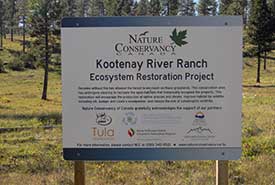 Winter is an important time for tending to forest management on the Nature Conservancy of Canada's (NCC’s) conservation land in the East Kootenay. This is when we get busy with thinning the trees that are encroaching on the open forest and grassland ecosystems that have naturally occurred here for thousands of years. Open landscapes, with fields of bunchgrass and scattered Ponderosa pine and larch trees, were historically maintained by periodic low-intensity wildfires that would take out tree seedlings and shrubs while leaving the veteran trees unscathed. These fires would regenerate the soil and encourage the robust growth of grasses and other meadow plants.

Without periodic burning — either intentionally set and controlled, or natural occurring wildfires — forest trees and shrubs will steadily encroach on open grasslands, choking out grasses and other meadow species and transforming the landscape from grassland to woodland.

Today, after nearly 100 years suppressing wildfires in order to protect communities, homes and property, the landscape of the East Kootenay has transformed dramatically, both in what is growing there and how it functions. In some valley-bottom areas of the Rocky Mountain Trench scientists have documented the loss of nearly half the grasslands and open forest since the 1950s as the tree cover increases until the area becomes a dense, closed forest. 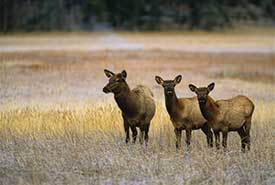 Elk in the Columbia Valley, BC (Photo by Twildlife - Dreamstime)

Reclaiming an open landscape is important for the wildlife that rely on grassland ecosystems in the East Kootenay, especially browsing animals like mule deer, bighorn sheep and elk, which need open grasslands to nourish them through the winter months. But creating habitat for wildlife is just one of the reasons we are clearing out in-grown forests on our conservation lands in this region. Dense stands of trees, as well as the accumulation of fallen woody debris, represents a significant fire risk, one that threatens local communities and undermines these ecosystems' natural resilience.

This shift to denser forest cover also means that when a wildfire starts, its more likely to be bigger, hotter and last longer. Indeed, BC’s wildfire seasons are starting earlier and lasting longer, and have been influenced by more pronounced droughts due to climate change and excessive fuels as the result of fire suppression, widespread forest health problems, and forest management practices. Restoring open forests is an essential way to increase the resiliency of these ecosystems and enable the land to recover after wildfire.

NCC has been restoring the open landscapes on the Kootenay River Ranch conservation area since NCC acquired the property in 2004. The goal of this ongoing ecosystem restoration initiative is to reclaim the traditional openness of the landscape, enhance wildlife habitat and minimize the risk of catastrophic wildfire. 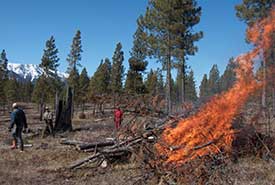 In 2019, NCC conducted a restoration project where a variety of innovative restoration techniques were used to restore approximately 45 hectares of dry open forests along the valley benches of the Rocky Mountain Trench. The restoration work was undertaken in winter so that some of the accumulated piles of vegetation could be safely burned or left on the ground providing nutrients to the soil as the woody slash decomposes, though in some cases the material is chipped and left on-site to decompose or used in other restoration projects. This work also offered a useful training opportunity for BC Wildfire Service firefighters, who were able to practice tree-felling skills while assisting the restoration work.

To date, a total area of approximately 300 hectares (740 acres) has been restored on the Kootenay River Ranch, for the benefit of wildlife and people.

NCC recognizes the Habitat Conservation Trust Foundation and anglers, hunters, trappers and guides who contribute to the Trust, for making a significant financial contribution to support the Kootenay River Ranch ecosystem restoration project. Without such support, this project would not have been possible.”

Generous funding contributions were also made by the Fish & Wildlife Compensation Program and the Columbia Basin Trust. NCC is grateful for their support.