www.natureconservancy.ca > Home > Where We Work > Manitoba > Faces of NCC > Staff 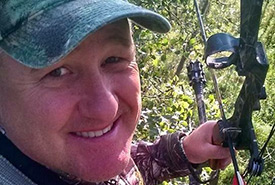 Tim Gompf joined the Nature Conservancy of Canada's (NCC's) Manitoba Region in the fall of 2016 as a natural area coordinator. He is currently the natural area coordinator for the Riding Mountain Natural Area and the Lower Qu’Appelle Assiniboine Quill Lakes Natural Area, both of which lie in the western part of the province. His responsibilities include securement, stewardship and management activities on all of NCC’s properties in his natural areas. Tim finds protecting habitat and biodiversity of Manitoba’s wild places to be one of the most satisfying aspects of his position.

Tim grew up on a livestock operation in southwestern Manitoba and has had a love of the outdoors since an early age. He can be found frequenting the local forested areas and lakes in the province (when he is not at work frequenting the forested areas and lakes of the province). He truly feels that working for NCC is not really working at all. They say if you find work you really enjoy it never seems like work and Tim says he thinks he’s found it.