Gastony's cliffbrake and smooth cliffbrake in an alvar habitat in the Interlake area of Manitoba.

Alvars in the Interlake 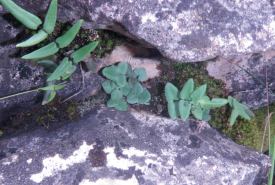 Alvars are habitats of shallow soil (10 centimetres or less) over limestone bedrock, with unique plant communities. Much of Manitoba’s alvars are shrubby, with large patches of bare rock at the surface. Some resemble grasslands or wetlands, while others have scattered trees.

Alvars are found in only a few countries in Europe and only a few provinces and states in North America.

Manitoba’s Interlake region is characterized by ridges and lowlands that were created by the advancement and retreat of the glaciers. On some of these ridges, the soil was scraped or washed away from the limestone bedrock, leaving it flat and exposed. It is on these exposed ridges that alvar is found.

Why are alvars important?

Alvar habitats are globally rare. In Manitoba only about 3,925 hectares (9,700 acres) alvar habitat have been documented.

Some alvars support species that do not grow elsewhere in Manitoba and are rare across Canada.

There are four main types of alvars in Manitoba:

Want to know more? Click this link to read the 2012 Alvar Initiative Report >

As an extension to the 2012 Alvar Iniative Report, click here for a peer-reviewed article with updated and new information.