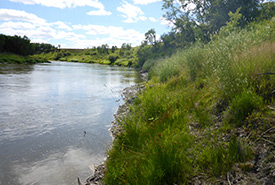 The Assiniboine Delta Natural Area encompasses the largest sandhill complex in Manitoba. Spanning most of south-central Manitoba, this area represents key habitat for sandhill-obligate species, including the endangered prairie skink (Manitoba’s only lizard), and a suite of invertebrates found only in active dunes and early successional sand communities. The Natural Area supports populations of grassland-obligate birds, such as chestnut-collared longspur and Sprague’s pipit on one of the last large, intact blocks of mixed-grass prairie in Manitoba. Aspen parkland and relict boreal forest support large herds of elk and an abundance of other wildlife.

Underlying the natural area is the province’s largest unconfined sand and gravel aquifer, the source of freshwater springs that feed the Assiniboine River and other waterways, and supports the nationally rare roundleaf monkeyflower. The groundwater-fed wetlands of the Douglas Marsh are of international significance, supporting one of the largest concentrations of breeding yellow rail in the Prairies. The Assiniboine Delta’s abundant and clean aquifer is also an important component of the local agricultural economy that relies on irrigation farming.