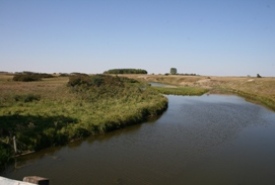 The West Souris Mixed-grass Prairie Natural Area (WSMGP) represents one of the last habitat strongholds in Manitoba for grassland birds.

Grassland birds are one of the most threatened groups of birds in North America. Species that were once seen across most of southern Manitoba are now primarily limited to the extreme southwest corner of the province, such as, chestnut-collared longspur, burrowing owls and Baird’s sparrow.

Temperate grasslands are the most converted and least protected habitat on earth, and the relatively large and intact prairies that remain in the WSMGP are key to the conservation of grassland birds and many other species. Great plains toads and mule deer also occur here. Twenty species listed on national endangered species lists, and 10 listed provincially occur within the WSMGP. Fifty-six provincially and 15 nationally rare or uncommon species are known to be in the Natural Area.

In addition to grasslands, the WSMGP supports diverse wetland and stream ecosystems. A dense concentration of pothole wetlands in the northern part of the Natural Area represents a key landscape for breeding migratory waterfowl and other wildlife. This wetland landscape also plays an important role in storing surface water, recharging ground water and providing habitat for aquatic organisms. Five major creeks or rivers flow through the area, provide corridors for migrating animals, provide nesting and foraging sites for migratory songbirds and important habitat for wildlife.