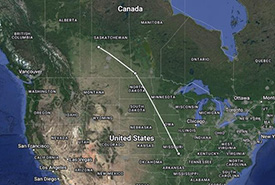 Map showing the birds' migration from Saskatchewan, passing through Manitoba to Missouri

World Migratory Bird Day is a day when the global community recognizes the ecological importance of migratory birds, the threats they face and their need for conservation.

An overwhelming majority of birds in Manitoba are migratory. Some species, like common ravens, may migrate relatively short distances from the northern to southern parts of the province. Others, like Hudsonian godwits, nest on the Arctic tundra in May but overwinter on the southern coasts of Argentina. No matter how far they travel throughout the year, many migratory bird species rely on habitats throughout Manitoba to provide nesting cover, foraging opportunities and stopover rest areas during various portions of their annual journeys.

Through land securement and stewardship, the Nature Conservancy of Canada (NCC) works to maintain habitats that sustain biodiversity, including migratory species. Recently secured properties, like the Breda Bay and MapleCross Siglavik Wetlands near Gimli, protect Lake Winnipeg shorelines that offer resting and foraging areas for shorebirds. The wetlands also provide nesting habitat for many species, including marsh wrens and common yellowthroats, and foraging areas for many other species, including the federally threatened barn swallow.

In the southwest of the province, the recent securement of 65 hectares of wetlands and grasslands brings NCC’s total protected lands in the Oak/Plum Lakes Important Bird Area (IBA) to over 800 hectares. This globally significant area hosts large concentrations of migratory species each year, including thousands of sandhill cranes and swallows that congregate in fall ahead of their migration south for the winter. The IBA also supports large numbers of colonial waterbirds, such as black terns that nest within the marshes, and thousands of waterfowl and shorebirds that amass at various times throughout the year.

Not only does NCC in Manitoba work to protect areas critical to many migratory bird species, we support and conduct research that helps clarify how migratory birds use habitat throughout the province.

In 2018, NCC partnered with Manomet, Environment and Climate Change Canada, Bird Studies Canada, the Souris River Watershed District and the MB Important Bird Areas Program (MB IBA) to establish International Shorebird Survey Routes near Oak/Plum and Whitewater lakes. These set routes have since been surveyed annually by volunteers, IBA Manitoba and NCC staff, and the survey data will help inform NCC’s future securement and stewardship activities for the area. 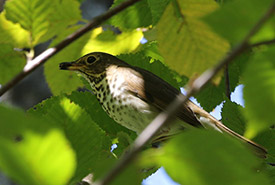 Though we know where migratory species can regularly be found within Manitoba, researchers and conservation organizations want to better understand their daily movements and how changes in the landscape and weather patterns may influence different species. In 2012, Bird Studies Canada and an international collaborative research group developed the Motus Wildlife Tracking System. The system relies on the tracking detection of animals that researchers have carefully equipped with special tags. The tags emit radio frequencies that are detected by receivers placed on towers. In 2019, NCC staff in Manitoba installed three towers in the southwest of the province and within the Oak/Plum and Whitewater Lakes Important Bird Areas. The data collected at these towers is already providing valuable information to the researchers who have been tagging birds throughout North America.

In the four years since they were deployed, NCC’s Motus towers in Manitoba have detected seven bird species equipped with radio tags. The table below outlines the species detected and you can see that some individuals were only detected once (e.g. Sprague’s pipit), while other tagged individuals were detected on multiple days (e.g. one semipalmated sandpiper was detected on three separate days, with a second individual detected only one day).

Data collected from these towers is incorporated into a database of records collected among all Motus towers around the world and are shared with researchers. Tracking the locations of where tags are detected over time helps improve our knowledge of how and when migratory species move throughout their lives. Some examples of tagged individuals detected at NCC’s Motus towers in Manitoba are included in the maps and research descriptions below.

This black tern individual was tagged by a research group led by Ann McKellar, PhD, and graduate student Nicholas Shephard at Environment and Climate Change Canada and the University of Saskatchewan. It was tagged near Jackfish Lake, in western Saskatchewan, on July 7, 2021. It was then detected on multiple occasions at that tagging site through July 22, until just one day later it was detected at a NCC Motus tower near Oak Lake, Manitoba. Only two days after being detected in Manitoba, the individual had already made its way to southern Missouri as part of its post-breeding migration.

Commenting on the research tied to this tagged black tern, Ann stated, “We are interested in uncovering the migratory routes and non-breeding areas of black terns that breed in Saskatchewan. The species is declining and we would like to gain a better understanding of the causes of decline. Are they primarily threatened on the breeding grounds? Or are populations limited by migration or non-breeding ground conditions? We would like to gain a better understanding of the threats facing black terns throughout their annual cycle, and for this, we require greater information on the habitats and locations used outside of the breeding period. The Motus network allows us to track individual tagged birds after they depart Saskatchewan and travel south, primarily through the Central Flyway and passing by important sites such as [NCC’s] Jiggen’s Bluff.  Overall, we hope to inform black tern conservation and stewardship in the Prairies and beyond.”

The map below shows the paths of a tree swallow tagged by the research group led by Kevin Kardynal, at Environment and Climate Change Canada, and graduate student Ana Diaz from the University of Saskatchewan. The individual was tagged on June 30 , 2021, just south of Saskatoon, and multiple detections at several Motus towers showed that it remained in that area until July 21. Only three days later, it was detected by an NCC tower near Oak Lake, Manitoba.

"We tagged tree and barn swallow juveniles just south of Saskatoon for a research project investigating post-fledging [leaving the nest] survival in agricultural landscapes in Saskatchewan using a small network of Motus towers,” commented Ana. “The birds had fledged less than 30 days before they were detected by NCC towers in Manitoba and had dispersed quickly, more than 400 kilometres away, from their natal [nest] site. Those detections, during the dispersal and migration of juveniles, are very valuable to have more information of the post-fledging period of these species, which is still an important knowledge gap of their life cycle.”

The maps included within this article are from https://motus.org. Use of these maps should be cited as follows, as per guidelines within the site: Birds Canada. 2019. Motus Wildlife Tracking System. Port Rowan, Ontario. Available: http://www.motus.org. Accessed: Oct. 6, 2022.