Bur Oak Forest at the Keyhole 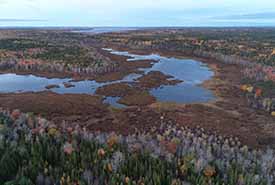 Along the west side of Grand Lake, New Brunswick, behind the cottage community of Princess Park, lies a stunning cove known as The Keyhole. Grand Lake is the largest lake in the province and connects to the Wolastoq (St. John) River system.

Protecting forests and wetlands along Grand Lake is a conservation priority for the Nature Conservancy of Canada (NCC). Several species of plants and animals that were once abundant here are now rare or at risk, due to the long history of clearing and development along the shores of Grand Lake. One such species is bur oak, which was a common species of old-growth floodplain forest of Grand Lake and the Wolastoq (St. John) River valley. Before the discovery of bur oak at The Keyhole in 2020, there were only eight known populations left in New Brunswick. And our province’s bur oaks are special; they are genetically distinct from other parts of the bur oak range, making it vitally important to protect these remaining trees.

“When the landowners (at The Keyhole) first invited me to visit this property, I couldn’t believe my eyes when I saw the uniquely shaped leaves of bur oak,” said Paula Noel, NCC’s New Brunswick program director. “I knew this was a rare species in the province but had yet to learn how rare, and how significant finding a mature bur oak grove was in New Brunswick!”

Thanks to a partial donation of land by Gloria and Jörg Beyeler, and Audrey and George Peppin, through the federal Ecological Gifts program, NCC has protected a 70-hectare nature reserve at The Keyhole, including wetlands and a mature floodplain forest that features a population of bur oak that is more than 200 years old.

Grand Lake feeds into the province’s longest river, the Wolastoq (Saint John) River; a priority conservation region for many at-risk plants and animals. The conservation of this natural area will be linked to a broader initiative to protect significant wetlands and forested shoreline within the Wolastoq River Watershed.

You can help us protect precious lands like The Keyhole, including the shoreline, wetlands and mature riparian floodplain surrounding Grand Lake and nearby areas. This region provides important habitat for many species of plants and animals, especially waterfowl that thrive in the wetlands, and boasts great fish habitat. Protecting The Keyhole will ensure the community has access to water for generations to come.

Conservation in this part of New Brunswick can also lessen the effects of seasonal flooding in the region. The lower Wolastoq (St. John) River has seen repeated and extensive once-in-a-lifetime-level flooding over the past decade.

The Princess Park region of Grand Lake includes some of the densest cottage developments in the province. The cottages and homes in this area were severely affected by the extreme spring flooding along the Wolastoq (St. John) River in 2018 and 2019. Property damage was extensive, as it displaced many residents, and roads were blocked and closed until the water receded. Most of the damage has been repaired, but the river is still susceptible to annual spring flooding.

The forest and wetlands at The Keyhole and other natural habitats surrounding Grand Lake help capture and hold excessive water. Permanent protection of the watershed’s lands and forests will help improve water storage capacity. Once NCC protects land, we develop management plans to restore any previously cleared or disturbed areas. This work improves their ability to absorb and hold water to lessen the effects of flooding and extreme precipitation events.

You can help support the conservation of sites like The Keyhole and the restoration of forests on and near floodplains in New Brunswick.