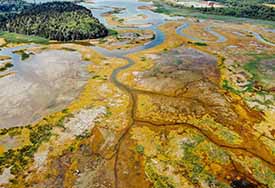 This past summer, Nature Conservancy of Canada (NCC) biologists explored urban wetlands within the city of Saint John, New Brunswick. This was a change of pace from working in pristine wilderness areas, and they discovered some wildlife oases in the heart of the city.

This project was supported partially by a financial contribution from Fisheries and Oceans Canada, through the Coastal Environmental Baseline Program. The Port of Saint John is one of six locations across Canada where baseline data is being collected to better detect changes in the marine environment over time.

On the coast and within estuaries like the Saint John harbour, wetlands along the shore influence, and are impacted by, the health of the surrounding waters. These wetlands are affected by the tides, which provide a direct connection to the marine habitats in the Bay of Fundy. Fish and other wildlife spend part of their lives in the wetlands, and part in the estuary or open waters of the bay.

NCC staff assessed wetlands in and around the harbour. These wetlands provide valuable ecosystem services to all of us. Ecosystem services are natural functions of wetlands which provide direct and indirect economic, cultural and social benefits to people. For example, wetlands can aid in flood prevention, water quality improvement or provide recreational opportunities like photography or fishing.

This work began with looking at aerial and satellite imagery to locate wetlands around the Saint John harbour. Some wetland measurements were made from these images. Then, during July and August, NCC biologists visited the wetlands to record information on the plants and animals found there, and recorded information on water levels, surrounding conditions and took photos. The data was collected according to the Wetland Ecosystem Services Protocol for Atlantic Canada, a standardized method for rapidly assessing important natural functions of coastal and tidal wetlands

At the 12 wetlands assessed within the city, invasive plants were found at every site. The most common was the widespread invasive reed canary grass. This grass can grow so thick it crowds out all other wildlife. One east-side wetland was covered with a small South African plant called brass buttons. Lots of native wildlife was observed in the wetlands, including species of concern like green ash, nelson’s sparrow and monarch butterfly. There were also many deer, as well as shorebirds, ducks and herons, which demonstrates the importance of these wetlands as refuges for urban wildlife.

Where these wetlands really shine in the city, however, is the services they provide for the people living nearby! The assessments showed the wetlands in and around the Saint John harbour were particularly good at intercepting storm surges to reduce property flooding, removing pollutants from water and exporting nutrients to the surrounding waters, which benefits aquatic and marine wildlife and fisheries.

Participating landowners will be receiving reports on their wetlands, highlighting the services they provide as well as advice on how they can help their wetlands thrive.