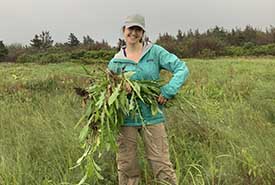 The Nature Conservancy of Canada (NCC) is removing perennial sow-thistle, an invasive species, from the land behind Blooming Point Beach. Perennial sow-thistle is an aggressive weed that can grow up to 1.5 metres tall and is crowding out native plants on Prince Edward Island.

NCC is undertaking a multi-year project to identify, map and remove by hand patches of perennial sow-thistle in Blooming Point Beach’s salt marsh. Similar in appearance to a dandelion, it has small, yellow flowers perched at the ends of tall stems. A single plant may have as many as 20 flower heads, which bloom from June to October. Its seeds can spread quickly during windy conditions.

“This invasive plant takes up valuable space and ground cover, which can crowd out native plants if left unchecked,” said Hannah Kienzle, PEI conservation assistant with the Nature Conservancy of Canada. “It looks like a giant dandelion. It is a hardy weed that grows up to 1.5 metres in height and spreads outwards, occupying areas that are needed by native plants.” 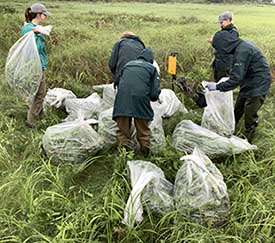 Removing perennial sow-thistle is tedious and time consuming. The entire plant must be pulled, and even a small root fragment can regenerate as a new plant. Recently, NCC was helped by staff at Parks Canada, which has property adjacent to the Blooming Point Nature Reserve. Together, they hand-pulled and removed 13 bags of the invasive plant. Parks Canada is now stewarding its own lands to map the extent of sow-thistle.

“We are grateful to Parks Canada for their help in our invasive species pull. This is going to be a long mountain for us to climb,” says Hannah. “This weed is a very good disperser, both by wind (seeds) and by creeping rootstalks (rhizomes).”

Some of the plants get quite large. Known as a problematic plant for agriculture, perennial sow-thistle tends to take over fields and reduce crop yield. However, it can also become abundant in flood plain areas and on wetlands.  NCC is in the process of collecting more information on how it impacts natural ecosystems. The plant does not pose a threat to humans.

Hannah says Island residents can keep an eye out for it near their own homes, cottages, roadsides and occasionally in lawns and gardens. NCC is also sharing information with the Prince Edward Island Invasive Species Council.

To volunteer at the perennial sow-thistle pull and other outdoor acts of conservation, contact Hannah Kienzle at hannah.kienzle@natureconservancy.ca or 902-892-3608.