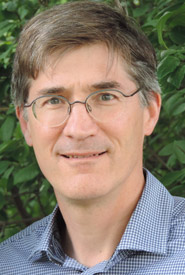 Joël Bonin, associate vice-president development and communications for the Nature Conservancy of Canada (NCC) in the Quebec Region, has been a champion of conservation for over 25 years. Throughout his career at NCC, he has significantly contributed to the protection of Quebec’s biodiversity by overseeing more than 300 conservation projects leading to the protection of more than 300 square kilometres.

A biologist by profession, since completing his master's degree at McGill University Joël has focused on the ecology of amphibians in southern Quebec. The author of several reports on the status of amphibian and reptile species in Quebec and Canada, he has also served as a member of the Committee on the Status of Endangered Wildlife in Canada.

Joël’s research has undoubtedly contributed to the body of knowledge on amphibians and their distribution throughout Quebec. His most noteworthy contributions include several extensions of species ranges and the discovery of the mountain dusky salamander in Canada.

From the Ottawa Valley to the tip of the Gaspé Peninsula, the American border to the foothills of the Laurentians and all along the St. Lawrence River to the Magdalen Islands, Joël has been at the forefront of extraordinary conservation projects over the past 25 years. He has also succeeded in expanding the NCC team, which has enhanced the organization’s scientific profile. Joël has also increased NCC’s stewardship activities on NCC-protected lands, all while developing and implementing an ambitious program to protect Quebec’s exceptional sites.

Joël has been a board member of Bird Protection Quebec, the Mont Saint-Hilaire Nature Centre/Gault Nature Reserve of McGill University and the Association pour la conservation du Boisé Papineau.

Motivated by his background in biology and his passionate nature, he has mastered the art of persuasion when it comes to the importance of nature and species conservation. A natural leader, he now manages a team of more than 30 professionals working throughout the province. Joël also collaborates with a number of volunteers from all walks of life, ranging from science to law. A devoted administrator and scientist, he will continue to forge fruitful partnerships with public and private organizations who are united in the common goal of protecting nature in Quebec.