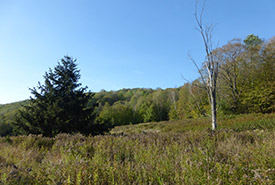 The Nature Conservancy of Canada (NCC) protects a 155-hectare (383-acre) property in Grenville-sur-la-Rouge, in the Laurentians, called the Chemin de Young Settlement. Located about 120 kilometres northwest of Montreal, the site is adjacent to NCC’s Kenauk - Saumon (Kinonge) river valley property. It is located within a forest core that enhances connectivity between Mont-Tremblant National Park and the Ottawa Valley.

Maintaining ecological corridors between these large, forested areas, which are partially fragmented by roads and development, is essential for wildlife to move and plants to disperse from one habitat to the next. 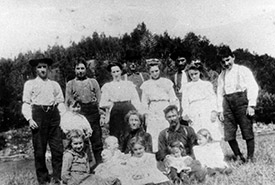 The property was previously owned by the Young family. They arrived in Canada from Scotland in the 1820s and settled in Grenville-sur-la-Rouge. They purchased a piece of land, to which several others were added over the years. Eventually the path leading to the properties was named after them: the Chemin de Young Settlement.

Over the years, some family members operated the agricultural portion of the land. Others worked for their neighbours: the Seigniory Club. It was a private wilderness retreat for the political and financial elite and is today known as Kenauk Nature, a fish and game reserve open to the public. The clubhouse is now the well-known luxury hotel Château Montebello.

Most of the Young family descendants then left the region and sold the property in 2018 to NCC. The family was touched to witness a chapter in their history ending, but also delighted to know that the ecological wealth of their land would now be protected for the long term.

A rich and diverse natural environment

The Chemin de Young Settlement is mainly composed of forests of maple, birch and hemlock, a rare conifer. Three plant species that are vulnerable to harvesting — crinkleroot, maidenhair fern and large-flowered bellwort — can also be found here. Butternut, an endangered species in Canada, also grows here.

The remainder of the property features wetlands, including a wooded bog and wet meadow, marsh and swamps. These areas are likely to support many waterfowl species, such as black duck and wood duck.

The ecological characteristics of the property and observations on neighbouring lands suggest that the property likely supports the following bird species:

Eastern wolf might also be found on this property. Moose, black bear, Canada lynx and bobcat have all been spotted on nearby properties. Future biological inventories will confirm their presence.

The conservation of this property is made possible through the financial support of the Ensemble pour la nature project of the Ministère de l'Environnement et de la Lutte contre les changements climatiques, the Government of Canada's Natural Areas Conservation Program, the U.S. Fish and Wildlife Service (through its North American Wetlands Conservation Act) and an NCC donor wishing to remain anonymous.

Protecting this land helps to consolidate an important ecological corridor of connected habitat for species in the area. NCC works to raise awareness of this issue among the public and communities, through the Action-Climat Québec program of the Ministère de l'Environnement et de la Lutte contre les changements climatiques.