Integrating conservation and public accessibility at the Alfred-Kelly Nature Reserve 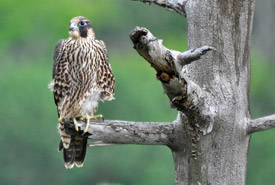 Located just 60 kilometres from Montreal, the Alfred-Kelly Nature Reserve (500 hectares/1,236 acres) is nestled in the Piedmont and Prévost Escarpments of the Laurentians. This nature reserve in the heart of one of the region’s iconic natural areas combines conservation and public access.

The nature reserve was named in honour of a generous donor, who was both a bird and nature enthusiast. The reserve was established by the Nature Conservancy of Canada (NCC), with the help of local, regional and government partners. The escarpments in the reserve provide refuge for more than 80 per cent of all birds of prey species recorded in Quebec. Several vulnerable species, such as peregrine falcon, are found here.

These rocky landscapes are home to a variety of plants and animals. The property provides habitat for rare species, such as purple clematis and Holboell's rockcress. Vulnerable species, such as smooth greensnake and pickerel frog, also live here. The property is open to the public for recreational and outdoor education activities. However, NCC and our partners are working to ensure that the human impact on habitats is as minimal as possible. 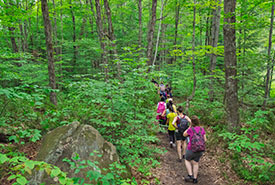 The site is open year-round for hiking on 16 kilometres of trails. In the winter it is open for cross-country skiing and snowshoeing. Ice climbing is allowed until the end of February, when peregrine falcons begin selecting their nesting sites.

Public access conditions, including the required membership in the Fédération québécoise de la montagne et de l’escalade, have been put in place to prevent any disturbance of current and future nesting sites. However, rock climbing (which has a more direct impact on peregrine falcons during the nesting season), dogs and bicycles are prohibited.

The trails are accessible from train station in Prévost, with the new pedestrian access that goes along the linear park of the P'tit Train du Nord. Three new access points are also available: at the end of Chemin du Roitelet, from Place des Hauteurs or from Chemin de la Rivière.

In May 2016, NCC announced the conservation of a strategic 135-hectare (333-acre) property in Saint-Hippolyte. This adds to the total protected area of the Piedmont, Prévost and Saint-Hippolyte escarpments. The property features a large, mostly connected forest that allows for movement of mammals with large ranges, such as moose.

A master plan (available only in French: conservationdelanature.ca/rnak), which combines accessibility and protection of the natural area, rallies nearly 30 regional partners around a common vision for conservation, research and discovery, as well as the region’s economic development.

To ensure the protection of this iconic Laurentian landscape, NCC gathered the support of conservation leaders, such as the Comité régional pour la protection des falaises, Bird Protection Quebec and Les Amis de la réserve naturelle Alfred-Kelly. These organizations contributed significantly to the project’s success and continue to work hand in hand with NCC in managing the reserve.

The establishment of the Alfred-Kelly Nature Reserve, with its responsible public access, has been made possible thanks to these key NCC partners: