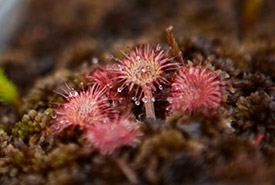 Setting the course for COP26!

A 50-centimetre-deep section of soil, called a core, was collected last September from the Lac-à-la-Tortue peat bog by two researchers from the Université du Québec à Montréal (UQAM), Michelle Garneau and Nicole Sanderson, under the direction of Professor Michelle Garneau. The core was sent to Glasgow, Scotland, and will be presented at an event specifically focusing on the role of peatlands in the fight against climate change as part of COP26.

"The peat core is part of an exhibition organized by the international group C-PEAT (Carbon in Peat on EArth through Time) that was held on November 5, 2021" said Nicole, research officer at UQAM. "During this exhibition, 75 peatlands from 20 countries, from nothern to tropical regions, were presented in the form of a "world peatland library," supported by an interactive map with photos and interviews with stakeholders and scientific researchers, including the one at Lac-à-la-Tortue. In parallel to the discussions around international agreements to counter global warming, the activities on peatlands will raise awareness of their contribution as a natural carbon sink. The development of conservation strategies for the protection of these ecologically valuable ecosystems will be highlighted."

Located south of Shawinigan and covering 66 sqaure kilometres, the Lac-à-la-Tortue bog is the largest bog in the St. Lawrence valley. It was formed several thousand years ago by a branch of the Saint-Maurice River.

Bogs are wetlands in which peat forms and accumulates over time from dead plants, particularly sphagnum mosses, but also other types of moss, sedges and woody plants.

The Lac-à-Tortue bog is a particular type of bog, with a raised centre, fed only by rainwater and snowmelt. This peat bog is characterized by an acidic pH and that it is supplied in minerals only through precipitation.

With a total area of 66 square kilometres, the Lac-à-la-Tortue bog is the largest peat complex in the St. Lawrence Lowlands. It began forming 10,000 years ago, and over its entire history has accumulated a total of 6.36 megatons of terrestrial carbon.

It is home to a wide variety of animals, including beaver, coyote, redbelly snake, wood frog and green frog. Moose, black bear and white-tailed deer are the large mammals that use this vast site. In addition, there are several ponds and swamps here that are home to many waterfowl, including black duck, wood duck, great blue heron and blue-winged teal. Sandhill cranes have also been seen on numerous occasions. There are also plant species considered to be at-risk, such as Virginia chain fern and twin-scaped bladderwort.

Wetlands provide us with many ecological services, particularly by absorbing large quantities of water during heavy rainfall or rapid snowmelt. This buffering effect helps prevent streams near the bog overflowing. In addition, bogs are considered important carbon sinks that contribute to lessening the impacts of global warming.

For these reasons, protecting this type of environment is essential. The Nature Conservancy of Canada (NCC) began its work in this sector in 2005, and now owns 48 square kilometres of the Tourbière-du-Lac-à-la-Tortue nature reserve. This is an area almost twice the size of Oka National Park. The site straddles the municipalities of Shawinigan, Notre-Dame-du-Mont-Carmel, Saint-Narcisse and Saint-Maurice in the Mauricie region. As the provincial government also protects a significant area within its Lac-à-la-Tortue ecological reserve, in all, approximately 81 per cent of wetlands in this area are now protected.

Due to the humid nature of this area, this NCC-protected bog is only accessible through access agreements. However, it is possible to get a glimpse of it via the trails of Cœur nature park, located in Saint-Narcisse. University researchers are also studying the ongoing status of the bog as well as the ecological and physical processes that take place there.

“This project safeguards a very rich natural environment, consisting mainly of peat bogs, which is home to at-risk plant species, such as Virginia chain fern and twin-scaped bladderwort, both of which are likely to be designated threatened or vulnerable under the Government of Quebec’s Act Respecting Threatened or Vulnerable Species,” explains Patrice Laliberté, NCC project manager in Quebec. “There are also several species of orchids, carnivorous plants and health such as bog-laurel and blueberries. The remainder is composed of a mosaic of softwood forests and wooded islets, some of which contain large mature pines.”

NCC would like to thank forest asset management company Solifor, a company of the Fonds de solidarité FTQ, from which NCC acquired the property, for its extensive collaboration throughout this project.