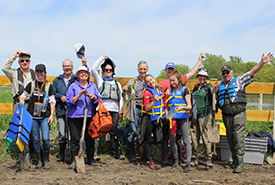 This past June, motivated citizens participated in a tree planting and cleanup activity on île du Moine in Sainte-Anne-de-Sorel. The project, led by the Nature Conservancy of Canada (NCC), in close collaboration with the members of the Commune de l’île du Moine, involved landscaping certain areas of the island to promote the recovery of rural birds in this environment.

The 1,236-acre (500-hectare) island, owned by NCC, was once home to some 30 species of insect-eating birds. However, since the removal of cattle from the island a few years ago, these birds have become much more rare. The presence of cows favours that of some rural birds, since cows attract insects on which the birds feed. As a result, NCC undertook to restore the island’s 395-acre (160-hectare) historic grasslands and then reintroduce cows.

The objective of the Retour au pâturage à l’île du Moine project is to restore the balance of this natural environment by preserving its native species and helping to establish sustainable agricultural practices. Ten volunteers, including Yves Gaudette, farmer and president of the Commune de l’île, as well as two NCC employees, set out on a two-fold mission: to plant native trees, which will provide shade for livestock and serve as habitats for birds, and to collect waste washed up on the island.

Their day out in the fields was highly productive. The participants reached the island by rowboat, attended a tree planting demonstration by Yves, and shared their observations of wildlife species during a lunch break in the field. The participants were efficient, planting 100 small trees from three native species — black cherry, yellow birch and red oak — and collecting the equivalent of seven large bags of garbage that had been washed up along the shoreline by the spring floods. The activity was also successful in terms of observations, as the team spotted many bobolinks, a bird species designated as threatened in Canada. The day provided a sense of great accomplishment.

Community involvement is at the heart of the success of conservation and restoration projects. NCC extends its warmest thanks to the volunteers who took part in this activity, as well as to the members of the Commune de l’île du Moine for their collaboration on this project. It is thanks to the work of conscientious citizens that organizations like NCC can make a real difference.

This activity was only the beginning! Further efforts will be required to ensure recovery of the targeted bird species. An event to install nesting structures for barn swallows, one of the species present on the island, is planned for July 13, 2019.

Are you interested in getting involved with NCC? Visit conservationvolunteers.ca for a schedule of upcoming events!

Thank you to the organizations who were partners in this project