The case of the John Sauro marsh 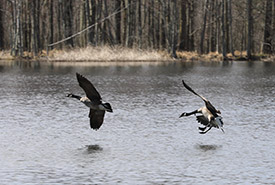 Spring is a time of renewal. But, in Canada, it is also increasingly synonymous with flooding.

As a result of climate change, storms are becoming more frequent and intense. To address this, Intact Financial Corporation launched the Intact Adaptation Action Grants to support organizations that are developing practical solutions to reduce risks related to climate change, including flooding.

Experts confirm that wetlands, which act like sponges, are strong allies in the fight against flooding. That is why Intact Financial Corporation, the Nature Conservancy of Canada (NCC) and our partners are teaming up to restore a large marsh in the Montérégie area.

Wetlands, such as marshes, are natural areas that are permanently or temporarily submerged or permeated by water. The plants that grow in these areas absorb and retain water, gradually releasing it. In this way, they allow surplus water — like runoff from melting snow — to return to the earth rather than flooding streets.

Although wetlands are today considered critical to ensure the resilience of communities, for a long time, they had a bad reputation. They were seen as useless or, even worse, disgusting swamps teeming with harmful insects. As a result, between 70 per cent and 90 per cent of wetlands in Quebec’s urban and agricultural areas disappeared. Like many other organizations, NCC is trying to reverse this trend by protecting wetlands across Canada.

When NCC purchases a piece of land, sometimes the wetlands on it have already been drained or destroyed. To compensate for these losses, we create ponds, marshes and peatlands on the property. This green infrastructure provides the same services as the original wetlands did in the past. 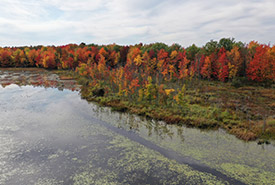 The John Sauro marsh is a good example of such a replacement infrastructure. With a surface area of 19 hectares (47 acres), it is part of the Tourbière-de-Venise-Ouest Nature Reserve, southeast of Montreal. This reserve, on the shores of Lake Champlain, is vitally important to the region, as it absorbs water overflow during the spring thaw.

The marsh has had its ups and downs. It was once a wetland frequented by several species of waterfowl. In the early 1980s, it was drained for a real estate project but was eventually purchased by John Sauro, who wanted to protect this beautiful place. Only 23 at the time, John used all of his savings, along with loans from family members, to purchase the land. The real estate project never saw the light of day.

To address the lack of wetlands around Montreal, Ducks Unlimited Canada (DUC) transformed part of this drained land into a marsh. In 2003, John donated most of his land to NCC — some 380 hectares (939 acres) of dense forests and sparkling streams.

A restoration project full of promise

Today, the John Sauro marsh is facing a new challenge. The more than 35-year-old water level control structures here are showing signs of deterioration. Their failure would disrupt the wetland’s ecological functions, such as reducing the risk of flooding. It would also cause a loss of habitat for wetland species.

Intact Financial Corporation, DUC and NCC have made it their mission to fight the ravages of time in the John Sauro marsh. It is an immensely important project, since the marsh absorbs roughly 60 million litres of water per year!

By replacing the damaged structures with sturdier ones and repairing damaged dikes, these organizations will help ensure the resilience of surrounding communities regarding flood risks.

Whether natural or man-made, wetlands are essential for a healthy, sustainable and prosperous future.

Intact Financial Corporation is the largest provider of property and casualty (P&C) insurance in Canada and a leading provider of specialty insurance in North America, with over $11 billion in total annual premiums. The Company has approximately 16,000 employees who serve more than five million personal, business and public sector clients through offices in Canada and the U.S.

We would like to thank our other partners in this project: the Fondation de la faune du Québec, the U.S. Fish and Wildlife Service (pursuant to the North American Wetlands Conservation Act), Ducks Unlimited Canada and John Sauro.