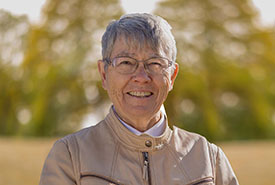 When Ann Phillips joined NCC’s Saskatchewan Regional Board, she knew it wasn’t enough to give of her time and expertise.

It was 2008 and Ann was already recognized as a force in the local arts community. A lawyer, she often used her training to help arts organizations build a solid foundation for growth. She wanted to do the same for NCC. “But I also said to myself, ‘You should put your money where your mouth is,’” she remembers.

So, Ann and her husband, Roger, the former CEO of Regina steel company IPSCO Inc., made annual donations at NCC’s Leaders in Conservation giving level to support conservation priorities in Saskatchewan. And their generosity didn’t stop with Ann’s retirement from the board in 2015. Shortly after Roger’s passing in 2013, Ann began making a series of major gifts to NCC through the Ann & Roger Phillips Foundation. She was inspired to give after another local donor offered to match any new donations on Giving Tuesday. “I’m a big proponent of leverage,” Ann says. Last year, she made her biggest contribution yet, steadily increasing amounts to the Landmark Campaign that will total $150,000.

While her campaign pledge can be used to supportany project within Saskatchewan, Ann hopes that it will help steward some of her favourite NCC properties, including Fairy Hill, an expanse of native grasslands, woodlands, river and flood plains just 20 minutes north of Regina, and the Old Man on His Back Prairie and Heritage Conservation Area, home to NCC’s herd of plains bison. She also likes that NCC is science-based and strategic.

“With a country as big and beautiful as ours, it’s important that we take steps to properly look after it,” she says.

Ann Phillips is a generous supporter of the Landmark Campaign. Learn more about the campaign and what you helped accomplish, here >