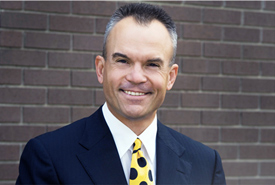 David Dubé knows the stereotype: real estate developers are out to pave the world. But he’s made it his lifelong mission to debunk it.

The Saskatoon native grew up camping and hiking throughout western Canada with his family. Today, as president and CEO of Concorde Group Corp., Saskatchewan’s leading developer, owner and manager of commercial real estate, he likes to spend his free time knee-deep in a cold stream practising the art of fly fishing.

It was these experiences and a desire to prove the naysayers wrong that inspired him to say “yes” to a volunteer request from the Nature Conservancy of Canada more than 10 years ago.

“I wanted people to reject the stereotypes and see that business leaders can care passionately about conservation.”

From repairing fences and cataloguing species on NCC’s properties, to high-level corporate fundraising, David has done it all. As a current member of the Landmark Campaign cabinet, he’s helping share NCC’s story and vision with his many corporate and community contacts.

“Nature resonates with so many of us,” he says, “but it’s human nature to take it for granted. So many people think the most endangered landscape in the world is the Amazon rainforest. They’re shocked when I tell them that in fact it’s the temperate grasslands, like those found in Saskatchewan.”

David is committed to supporting and working with NCC over the long term to help change minds. “This is a ‘what’s next’ organization, and $750-million isn’t the end; it’s a new beginning to allow us to have greater scope and scale and get the message out to more people. I’m looking to even more great things from NCC in the future.”