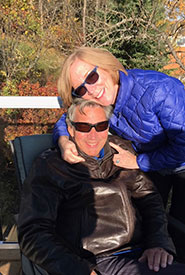 Gary Doer was in the middle of his second term as premier of Manitoba when American magazine Business Week named him one of the top 20 international leaders on climate change. It was 2005, the same year that the Kyoto Protocol, which Gary helped champion, entered into force.

Both milestones are an apt measure of something that has always mattered deeply to the former provincial politician and Canadian ambassador to the United States: protecting the environment.

As premier from 1999 to 2009, Gary legislated Manitoba’s commitment to reduce greenhouse gas emissions and introduced provincial water protection legislation. He also partnered with the Nature Conservancy of Canada (NCC) to establish a shared conservation funding model that included matching support from the Province of Manitoba, the Government of Canada and private donors — a model he later pitched to other premiers.

While ambassador from 2009 to 2016, Gary involved NCC in another groundbreaking partnership to help the governments of British Columbia, Montana, Canada and the United States follow through on an agreement to save the pristine Flathead River Valley in southeastern BC.

“I’ve had such a great experience with NCC over the years,” he says. “I’ve always found them to be a can-do organization that gets results and provides a long-term legacy for our entire country.”

It’s why Gary has remained involved with the charity since leaving Washington to work as a senior business advisor with the global law firm Dentons. As an NCC donor and Landmark Campaign volunteer, he has helped advance projects like Manitoba’s Tall Grass Prairie Natural Area, home to 29 endangered species and one of the most at-risk ecosystems in the world.

“NCC puts the puck in the net,” he says in true Canadian fashion. “I get such great satisfaction in knowing we are making a difference by conserving the land across this great country.”