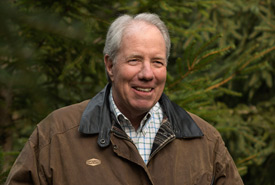 Sustainability and conservation have been part of the J.D. Irving, Limited (JDI) family history and business for many generations.

“Growing trees and looking after forests is a long-term commitment,” Jim Irving says. “And NCC knows it. This is a visionary organization with big objectives, a solid foundation and a track record of spending wisely on evidence-based conservation.”

It’s thanks to this vision he shares with NCC that Jim has volunteered for more than two decades. JDI has donated more than $5 million, including conservation lands in the Musquash Estuary.

Located where the Musquash River in Saint John, New Brunswick, meets the world’s highest tides in the Bay of Fundy, NCC’s 2,200-hectare (5,500-acre) Musquash Estuary Nature Reserve is a haven for wildlife, including bobcat, moose, harbour seal and many species of migratory birds.

“NCC’s work dovetails with our own. We’re both interested in having a long-term, constructive impact,” Jim says of this project and others he has supported. He’s particularly impressed with NCC’s science-based platform, which he says offers the evidence needed to plan for the future, influence government policy and build a lasting legacy for Canada.

A self-described “outdoorsman,” Jim, like his father and grandfather before him, enjoys time spent in nature and is committed to maintaining a sustainable forest operation. This is supported in part with a $1.5-million-a-year investment in forestry research that includes over 100 projects and 30+ partners, including NCC. The company also has one of the largest voluntary conservation programs in Canada that has been nationally and internationally recognized. In 2018, his father, J.K. Irving, planted the company’s one billionth tree since 1957 — a Canadian private company record. NCC is grateful to Jim and JDI for their ongoing support of NCC’s work under the Landmark Campaign.

J. D. Irving, Limited is a generous supporter of the Landmark Campaign. Learn more about the campaign and what you helped accomplish, here >