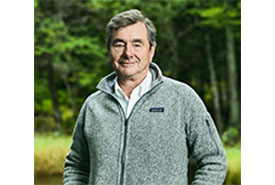 An organization you can trust

Nova Scotia native and entrepreneur John Risley counts himself lucky to have grown up in a very outdoorsy family.

“We often visited Green Bay and Petite Rivière — an area visited by Group of Seven painter J.E.H. MacDonald in the 1920s,” recalls John.

“Or we travelled to the Northumberland Strait. We spent a lot of time exploring what the province has to offer.”

Those memories later inspired him to purchase his own property on Nova Scotia’s South Shore, near Kingsburg.

In 2000, the Kingsburg Coastal Conservancy approached John to assist in the conservation of nearby Gaff Point, a popular destination for residents and visitors, overlooking the Atlantic Ocean. John agreed to support this effort if they partnered with the Nature Conservancy of Canada.

Today, NCC protects the Gaff Point Nature Reserve in partnership with two other organizations. Consisting of impressive cliffs, conifer forest, heaths and grasslands, the property plays an important role in supporting
the biodiversity of the surrounding area.

“We as humans have a better understanding of our impact on the environment, and it’s important that we work to leave it in a good state for our children and grandchildren,” he says of his reasons for rallying behind the Gaff Point project. “We used to assume that we would always have wild places. Now we know that’s not the case.”

John has continued to support a number of NCC projects over the years. He’s also a dedicated volunteer, having already helped the charity raise urgently needed funds as part of the Landmark, A Force for Nature and Natural Masterpieces campaigns. He credits NCC’s well thought-out governance structure and focused mandate for its success as Canada’s largest land conservation organization.

“I’ve made lots of pitches on behalf of NCC to people who didn’t know the organization. I’ve told them, ’You will go a long way to find an organization more professionally managed than NCC. NCC has sound principles, and can be trusted.’”

John Risley is a generous supporter of the Landmark Campaign. Learn more about the campaign and what you helped accomplish, here >