Monarch, ON (Photo by NCC) 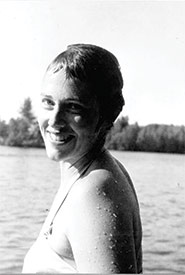 Deep in the heart of Essex County in Ontario is a property bustling with rare wetlands and meadows teeming with wildlife. The 41 hectares (102 acres) here are nestled just northeast of the community of Harrow, where the land meets the water along Cedar Creek.

Born and raised in Windsor, Ontario, the late Marianne Featherstonhaugh Girling grew up exploring the fields and waters of Essex County. Her passion for philanthropy was inherited from her mother, who taught her the importance of giving back and doing your part. During her life, Marianne spent decades as a professional volunteer — in her church, hospital and grassroots community organizations. And it was her father, Murray, to whom she attributed her spirit of adventure and passion for nature. He instilled in her a lifelong love of the Lake of Bays, where she would spend summers paddling and swimming near the family cottage in Muskoka.

Her commitment to helping protect precious areas was something she would pass on to her children and grandchildren, whom she would take out into nature every chance she could. “When you grow up with a strong role model as a mother, a love for nature becomes part of who you are,” says Karen Girling, Marianne’s daughter.

Marianne’s legacy gift to the Nature Conservancy of Canada (NCC) reflects her love for the region where she grew up. A new conservation property, which serves as important habitat to numerous species, has been named in her honour. The Marianne Girling Nature Reserve was made possible by a generous gift in her Will. “She would be so happy to know that people can walk through the land she helped to protect, exploring nature in the same ways she did growing up.”

Marianne’s lifelong love of nature and her commitment to community inspired her to leave a donation to NCC to support habitat conservation in Ontario. Her gift has gone toward protecting a part of a Provincially Significant Wetland that is home to species designated under the Species at Risk Act, such as barn swallow, eastern foxsnake, monarch, short-eared owl and yellow-breasted chat.  Conserving this land means adding to an important connected stretch of habitat along Cedar Creek that includes Marshfield Woods, a large forest and Area of Natural and Scientific Interest.

The land here is now linked to Marianne’s identity. Her gift is ensuring that her memory and passion for nature live on and inspire others to protect nature for the future. “She walked the talk. Whether she was swinging an axe at the cottage or outside jogging, she always wanted people to have the same opportunities she had growing up exploring nature.”

Marianne’s gift has contributed to the Landmark Campaign, the most ambitious fundraising initiative in NCC’s 57-year history. One of the goals of the Landmark Campaign is to inspire future generations to extend our legacy and lead more conservation efforts in communities across the country, something Marianne was passionate about throughout her life.

“I hope that her donation will trigger in people’s minds to do what they can to conserve land,” says Karen. “I would love to see people think about the future of the land and how to conserve it in perpetuity to honour Canada’s natural heritage.”

Marianne Girling was one of the conservation heroes who made our work in 2018-19 possible. Click here to read our annual report >