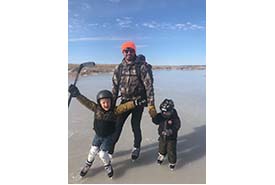 A match made in the grasslands

Summer or winter, rain or shine, when the sun rose, young Raif Richardson was out the door with his two dogs, roaming the forests and tall grasses of his family’s property in Headingley, just west of Winnipeg. Now a business leader and father with three sons of his own, Raif says the great outdoors has been the heartbeat of his family for generations.

“It is part of who we are,” he says simply. “We lived outdoors. As kids, if we weren’t in school, we were helping out on the property.”

This love of nature weaves its way through every aspect of the Richardsons’ lives. The family’s business, Winnipeg-based James Richardson & Sons Limited, runs Canada’s largest agribusiness, with a more than 160-year history of serving growers and international customers. The Richardson Foundation was established in 1957, with environmental support serving as a pillar of its mandate. The foundation’s partnership with NCC has spanned almost 20 years, including the Landmark Campaign.

As a trustee of the Richardson Foundation, Raif believes NCC’s mandate aligns with what the foundation hopes to achieve — sustainability, conservation and innovation. The trustees work closely with NCC staff to support science, securement, stewardship and engagement efforts in Manitoba, including the Oak Lake North project, species at risk surveys and wildlife monitoring. Raif is especially encouraged by the positive impact of the foundation’s investments over time.

“When I see a map of conserved land grow and merge into great corridors of protected spaces, I get really excited,” he says. “NCC is an organization that is always looking ahead. It’s not just about the land we’re standing on, but the next quarter mile and the next quarter mile after that. We need everything to connect together.”

Raif counts himself lucky to be able to spend as much time as possible exploring NCC’s conservation corridors with his family.

And while the view may be different from the one he enjoyed as a boy, one thing remains the same. “I’m still running out the door with my two dogs; there are just three kids trailing after them too!,” he laughs.

Richardson Foundation is a generous supporter of the Landmark Campaign. Learn more about the campaign and what you helped accomplish, here >