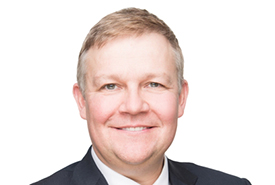 As president and chief executive officer of world-leading Caterpillar equipment dealer, Finning International Inc., Scott Thomson knows a thing or two about a unique value proposition. It’s why he’s so passionate about the Nature Conservancy of Canada (NCC), an organization he says offers powerful giving advantages, from improving the environment to reducing donor taxes.

Individuals who donate property or a covenant on title “have the opportunity to maintain a personal connection with the land, benefit from the [ecological gifts] tax incentive program and create conservation value for future generations.”

As far as Scott is concerned, that makes for a pretty straightforward donation proposition.

He’s not short on ideas for how to pitch NCC to corporations either. Prior to joining Finning in 2013, Scott was the chief financial officer of Talisman Energy Inc. Then one of Canada’s largest independent oil and gas companies, Talisman had a strong commitment to corporate social responsibility.

“If you’re a lumber company or an extraction company, building your social licence through protecting other areas of land can be pretty important,” he explains, adding that today’s companies are more socially accountable — to themselves, their stakeholders and the public — than ever before. Those involved in activities that impact the environment are especially conscious of their impact and the need to counter their work in ways that positively enhance the environment.

“Being involved with NCC can earn you some of that social licence,” he says.

Scott is busy pitching both of these strategies to prospective NCC donors as a member of the Landmark Campaign cabinet. He took on the role last year as a way of giving back to the western Canadian communities where he’s lived for most of his life. A resident of Vancouver with his wife and two young children, Scott grew up in the Okanagan Valley. He and his family often spent summers on Kalamalka Lake.

“Giving back to ensure we’re leaving the world in as good a place as we found it is important to me,” he explains. “In fact, it’s something we should all be focused on.”

It’s a unique value proposition he hopes will be impossible to resist.