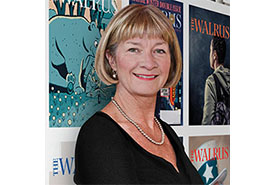 Shelley Ambrose has devoted her career to getting to the heart of the story, first as a reporter for The Globe and Mail and a producer on CBC Radio’s Morningside, later in public affairs at the Canadian Consulate in New York and now as the executive director and publisher of The Walrus.

Her latest volunteer assignment with the Nature Conservancy of Canada’s (NCC’s) $750-million Landmark Campaign calls for the same keen ability: to sum up what Canadians need to know.

“The real campaign is awareness,” Shelley says. “What resonates for me is the opportunity to introduce more Canadians to NCC and our important conservation work. It’s hard to get people to donate if they don’t know what we do or why we do it.”

She has made it her mission to change that — as a national board member from 2007 to 2013 and as a current member of the Landmark Campaign volunteer team.

Whenever the opportunity arises, Shelley encourages family and friends to get outside and enjoy NCC’s flagship conservation properties across the country. During a recent vacation in Nova Scotia, for example, she and a group of friends paddled the Pugwash Estuary, the largest estuary along the Northumberland Strait of Nova Scotia. With 12 protected properties totalling 440 hectares (1,080 acres), it's one of NCC’s largest conservation areas in the province.

During a winery tour in British Columbia’s Okanagan Valley, she proudly pointed out NCC’s efforts to conserve essential wildlife habitat in the area’s sun-drenched valleys, lakes, wetlands and rivers.

This summer, she adds, “I asked my dad and his friends to be on the lookout for the Atlantic salmon pools NCC has conserved during their fly fishing trip along the Bartholomew River.” The Bartholomew River is part of the Miramichi watershed, one of the best remaining wild salmon rivers in North America.

Experiencing nature first-hand is how NCC’s story is best told, she says, and how the Landmark Campaign will have its biggest impact.

“Our success will be measured by the increased number of Canadians who experience first-hand what NCC is, what we do and why it’s important.” While she admits there’s a lot of work to be done to reach that level of awareness, she believes that NCC’s story is one that people are deeply curious about.

“When you think about it, have you ever met anyone who didn’t care about nature? It’s one of the most pivotal issues of our time. Nature is the great equalizer.”