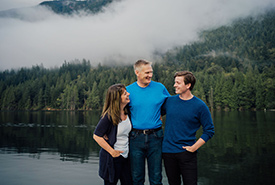 Keeping it in the family

Bob Mickelson’s family could think of no better way to honour his memory than by protecting an area important to him.

If you ask Jim Mickelson about his late brother, Bob, he will tell you about his lifelong love for animals — specifically for his horses. Having grown up with his older brother on the family farm in Roblin, Manitoba, Jim remembers a childhood exploring the outdoors together. “Looking back, I am so thankful for the opportunity we had as kids to be outside so much,” he reflects. “We would explore different parts of the Shell River Valley and would have big family barbeques by the water.” Jim remembers walking along winding valley paths with Bob and their cousins in tow, all the way down to the big “red rock” — a large rock covered in red-coloured lichen that served as a trail marker. Winters were spent cross-country skiing through the same valleys. In the summers, Bob, 15 years Jim’s senior and a former rodeo cowboy, would take to the valley on horseback.

“He would spend many hours riding horses through the area,” recalls Jim. “A lot of his favourite spots in nature were in the Shell River Valley.” Bob lived in Roblin and near the valley for his entire life, developing a deeply rooted passion for the area; so much so, that he ended up purchasing part of the lands here in 1980.

When Bob died suddenly in his early 60s, his family could think of no way better to honour his life — one surrounded by nature — than by ensuring the place he loved was protected for the long term. “The entire family got together after Bob’s death and decided unanimously that ensuring the perpetual conservation of this land through a partnership with the Nature Conservancy of Canada was the best way to commemorate him. The love he had for nature was the defining feature of his life, and this area is a microcosm of everything Bob loved about it.” This past summer, close to 40 members of the Mickelson family from five provinces gathered approximately 25 kilometres southeast of Roblin in the Riding Mountain area. Together, they unveiled what is now known as the Bob Mickelson Conservation Lands.

"We wanted to celebrate Bob’s life as well as create a legacy that would commemorate our family’s presence in the Roblin community for more than a century,” says Jim. “Bob was an important part of our family, and the donation celebrates both the ties we have to each other as family and our relationship to the area.”

Jim hopes that this partnership will inspire other landowners in Manitoba to ensure the future of landscapes, especially the province’s wetlands, by conserving them for the long term. “One of the things I hope come from my family’s partnership for conservation is that it will prompt others to think of the value of maintaining the wetlands and the natural environment that’s around them.” “My brother had a love for all animals,” Jim says, as he reflects fondly on Bob’s life. “We could think of no better way to honour his memory than protecting an area important to him and the species that rely on it.” Bob Mickelson and his family are true conservation heroes.

The Mickelson family was one of the conservation heroes who made our work in 2018-19 possible. Click here to read our annual report >