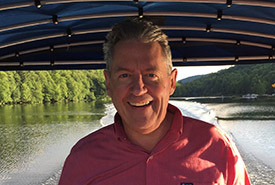 Midway between Ottawa and Montreal is an unspoiled, 7,000-hectare (18,000-acre) corridor of land, rich in hardwoods, including black maple. The corridor provides habitat for 24 imperiled species of plants, birds and mammals. Protected by NCC since 2013, the Kenauk project is a critical step in NCC’s plan to maintain a wildlife corridor that stretches north from the Ottawa River to the Laurentian Mountains.

In the heart of this place, a unique lake spanning over 1,300 hectares (3,212 acres), and reaching 85 metres in depth, is home to a healthy lake trout population. The lake is also the site of many family cottages – including that of Tim Hartley and his wife, who first met on the lake.

Tim is a leader in his community. He co-chairs the cottage owners association and has been encouraging local cottagers, municipalities and associations to ensure the long-term protection of the lake’s natural values. Tim made a significant contribution to NCC to protect land in the Kenauk area, and has invited other cottagers to do the same.

The support of Tim and other donors has supported NCC’s collaborations with scientists and the surrounding landowners to better understand and protect the biodiversity of this unique landscape. NCC’s annual biodiversity survey confirms the presence of numerous rare species, including four-toed salamander, one of Quebec’s largest colonies of the showy orchid, and the ghostly, chlorophyll-free American cancer-root plant.

Tim Hartley was one of the conservation heroes who made our work in 2018-19 possible. Click here to read our annual report >