In recognition of the public service of Jim Prentice and to create a legacy that honours his personal and professional passion toward conservation across Canada, the Nature Conservancy of Canada (NCC) is proposing to complete the Jim Prentice Wildlife Corridor Legacy Project in the Crowsnest Pass region of southwestern Alberta. This is a landscape that Jim lived and worked in and that helped shape his love and respect for nature.

The Jim Prentice Wildlife Corridor Legacy Project will conserve and connect one of the last internationally significant wildlife corridors in the Crowsnest Pass.

Launched in October 2018, the Jim Prentice Wildlife Corridor Legacy Project has seen great momentum. Together, all the generous donations to the corridor have allowed NCC to carry out this important work. We hope you will continue to spread the word about this project, helping us to continue building on this incredible momentum.

Upon completion of this project, a wildlife corridor over five kilometres wide will be conserved for the long term. This will support critical animal movement between the newly created Castle Crown Provincial Park, Waterton and Glacier International Parks and areas to the south, including Montana, to parks and protected areas north of Highway 3. When the corridor is completed, NCC will enter into discussions with the Government of Alberta to consider the construction of a wildlife crossing structure across Highway 3 and the railway line, similar to those completed within Banff National Park. 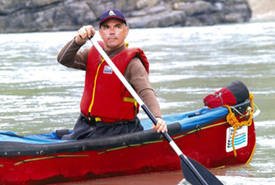 The case for conservation in the Crowsnest Pass

The Crowsnest Pass is considered by scientific experts to be one of the most important wildlife corridors requiring protection in North America. It naturally funnels wildlife movement across Highway 3 from the broader landscape, where years of effort and hundreds of millions of dollars have been invested in private and Crown land protection both in Canada and the United States. It is a critical link in the Yellowstone to Yukon Initiative, which sets out to complete a system of connected wild lands, waters and corridors across this broad geography.

NCC, along with many other groups and agencies, has been active in this area for a number of years. To date, NCC has already completed considerable conservation work that complements this vision and the actions of others, including the designation of the Castle parks by the Alberta Government.

The Crowsnest Pass is also a special place for Jim and his family. It was one of the places he felt a close connection to and where he developed a deep appreciation for nature.

An internationally recognized conservation initiative of this sort would be fitting. 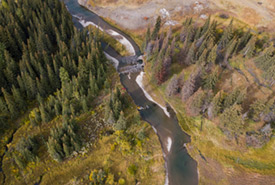 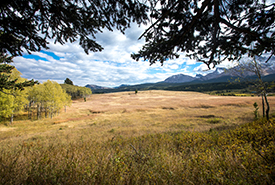 On October 26, 2018, NCC launched the campaign publicly. NCC has secured a considerable number of the properties in the corridor over the last decade; however, there are a number of critical parcels of private land that still need to be conserved to complete the corridor.

The completed corridor will create an opportunity for NCC to work with the Government of Alberta to explore future wildlife crossing structure options over Highway 3.

Outcomes of conservation work in the Canadian Rockies

Leading conservation experts agree that this corridor site is the most viable option for creating this critical north-to-south crossing point, which will connect millions of acres of protected areas in Canada and the United States. NCC is best positioned to secure these sites by building on the existing footprint that NCC has created in the corridor over the last decade.

During NCC’s long history of work in the Canadian Rockies, we have conserved over 280,000 hectares (700,000 acres) of priority conservation lands, making NCC the leading land trust organization working to protect this globally significant landscape. From the East Slopes in Alberta to the South Selkirks in BC, we work towards creative conservation solutions that ensure Canadians can continue to enjoy the incredible richness of this area now and for the long term. Our results are significant; from protecting the Flathead Valley along the Montana border, or the 55,000-hectare (136,000-acre) Darkwoods Conservation Area in BC, to the 14,000-hectare (35,000-acre) Waldron Ranch easement.

NCC’s approach to conservation in the Canadian Rockies focuses on connectivity between protected areas and on collaboration with partner organizations and communities as we engage a network of supporters behind a shared vision for conservation. 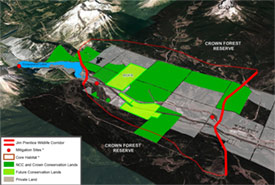 Investing in conservation in the Crowsnest Pass

In order to maintain this internationally significant wildlife corridor, NCC needs to conserve both private and Crown lands. NCC has been actively working within the corridor for more than a decade. Now with your support, we believe that we can acquire the remaining target conservation lands in the corridor over the next two to three years, and prepare the site for future consideration of an overpass structure. Thanks to the early campaign donations, the Prentice Property was secured in October 2018. The Government of Alberta has also committed to the corridor by ensuring that seven sections of Crown land in the corridor will remain undeveloped, which will contribute to the larger conservation landscape. With your support today, NCC will secure the remaining target conservation lands and complete the corridor.

The south side of the corridor contains a former industrial site, which is being evaluated for reclamation efforts to form the cross-highway wildlife movement corridor. NCC has also advanced conversations with other landowners in the corridor to assess the timing of their securement. 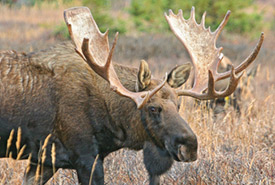 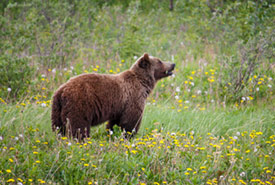 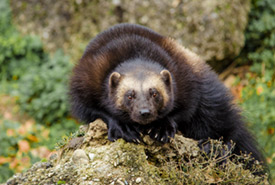 Investing in the Crowsnest Pass

How You Can Support The Jim Prentice Wildlife Corridor Legacy Project

Join other Albertans in creating a conservation legacy, ensuring this special place is conserved and Jim Prentice's legacy is memorialized by supporting this worthy campaign.

By making a donation, you will become a member of the Jim Prentice Wildlife Corridor supporters and will be recognized for your level of commitment to the project. You will also receive considerable tax savings by supporting the legacy project.

We invite all who have an interest in recognizing Jim’s commitment to conservation in Alberta and his passion for the Crowsnest Pass to support the legacy project. Gifts can be made at any level, and a charitable tax receipt will be provided.