Moss at Gullchucks (Photo by NCC) 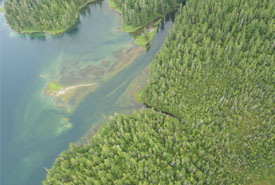 Gullchucks estuary from the air (Photo by NCC)

The Gullchucks Estuary brings together huge stands of old-growth west coast rainforest, a wild salmon-bearing river and a floodplain and estuary. Together, these habitats provide a home for hundreds of coastal species.

Located on the north coast of Denny Island, near Bella Bella and at the heart of the Central Coast Rainforest Natural Area, the estuary has remained ecologically intact for millennia. Its rare and biodiverse ecosystem is also a site of traditional and cultural importance for the Heiltsuk First Nation.

Estuaries are one of the most threatened ecosystems on the BC coast. They are often damaged by development, pollution and modification. The 20-hectare (50-acre) Gullchucks Estuary Conservation Area remains healthy and stable. As a parcel of private land, it was subject to possible development, but thanks to a partnership between the Nature Conservancy of Canada (NCC), the Heiltsuk First Nation, and other partners, the property has now been conserved for the long term. 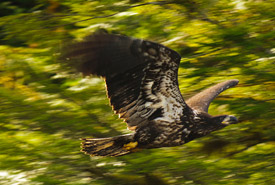 The Gullchucks Estuary is rich in biodiversity. It brings together coastal forest and shoreline with freshwater and marine environments. Many species therefore interact and flourish here.

Some forests experience regular events like wildfires. However the coastal temperate rainforest of BC’s central coast are only affected by these kinds of large-scale events on average every 4,000 years. Large areas of the Gullchucks Estuary Conservation Area are classified as old-growth forest. This means the dominant trees that make up the forest are at least 250 years old. Exactly how old these stands are has not been determined, but it could be centuries older than that.

The Gullchucks Estuary is located in the middle of the Nature Conservancy of Canada's Central Coast Rainforest Natural Area. This vast coastal temperate rainforest area spans the coast of British Columbia. It stretches from the southern part of Haida Gwaii to the northern tip of Vancouver Island, and inland to the height of the Coast Mountains.

This natural area falls within the southern reaches of the internationally-renowned Great Bear Rainforest. It is part of an ecosystem that is home to more living matter than anywhere else on Earth. 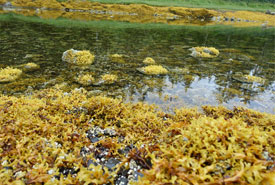 Coastal temperate rainforests are one of the last places on the planet where species and natural systems thrive as they did in ancient times. These lush rainforests are also among the rarest habitats in the world, covering just one fifth of one percent of the Earth's surface. Conserving the biodiversity of these areas is crucial for the health of the coast, and for the health of the planet.

By taking steps to protect the coast at its most fragile points, such as the Gullchucks Estuary, we are ensuring the survival of numerous native species and ecosystems that are an important part of BC's natural heritage 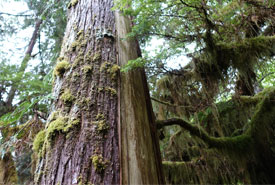 The Gullchucks Estuary is located in the traditional territory of the Heiltsuk Nation. Community members, located primarily in nearby Bella Bella, continue to sustainably harvest the area's abundant resources as they have done for generations. The estuary's shellfish, ducks, deer, berries, cedars and fish have sustained the Heiltsuk people for more than 10,000 years. The Gullchucks sockeye salmon run alone provides up to one quarter of the annual salmon harvest for the people of Bella Bella.

The Heiltsuk also operate a sustainable commercial clam fishery just offshore from the estuary. Conserving the estuary is essential for the health of this fishery and for the marine environment beyond.

The Nature Conservancy of Canada is working in partnership with the Heiltsuk Integrated Resource Management Department to jointly manage the new conservation area. Together, they are creating a plan that is in keeping with traditional use and ecological sensitivities.

This project was funded jointly by the Government of Canada, under the Natural Areas Conservation Program, and the TD Bank Group, under the TD Forests program.