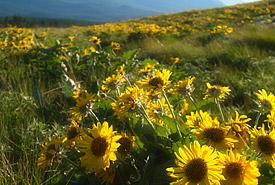 Pine Butte Ranch is an active cattle ranch located near Cranbrook, in the East Kootenay. It is celebrated for the exemplary health and productivity of both its cattle and its grasslands. With less than two per cent of British Columbia's grasslands under protection, Pine Butte Ranch makes an important contribution to the protection of this landscape.

In 2006, the Nature Conservancy of Canada (NCC) and the Van Steinburg family celebrated the protection of more than 525 hectares (1,300 acres) of Pine Butte Ranch grasslands.

These grasslands support a long list of native plants and animals, many of which are becoming increasingly at risk as their habitat diminishes. The area provides important habitat for wildlife such as:

The ranch contains small lakes and wetland areas that are used by as many as 80 migratory bird species, while resident birds such as bald eagle and red-tailed hawk enjoy excellent hunting grounds.

Species at risk confirmed on the ranch include:

Pine Butte Ranch has been owned and operated by the Van Steinburg family for more than half a century. Ray Van Steinburg, now in his eighties, has spent most of his life transforming the hard-scrabble beaten-down grassland that he purchased in 1952 into an ecologically vibrant ranch that works in harmony with nature.

"Mother Nature is our manager," said Ray Van Steinburg, who chose to partner with NCC to protect his beloved ranch from future development. "This is one of the last remaining grasslands in the area and we want to see it continue in its natural state instead of falling victim to the increasing pressures of urban development. Pine Butte has always worked to maintain the ranch as a viable working operation, while still working with — and enhancing — what Mother Nature has given us."