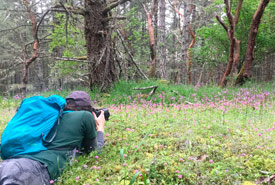 Photographing the meadows at Lohbrunner Woods, BC (Photo by NCC)

The 10-hectare (25-acre) nature preserve protects essential wildlife habitat in a region largely converted for agriculture. It protects many niche ecosystems, including dense forest, rocky bluffs and open meadows that feature arbutus, camas and other native wildflowers. A wide range of birds use these woodlands, including bald eagle and woodpecker.

Norma Lohbrunner first moved onto the 16-hectare (40-acre) farm in 1945 when she married her husband, Joseph. She became passionately committed to the farm and the forest, where she spent her entire adult life. In 2007, a few years before she passed away, she ensured that her property would be protected as a nature and farmland reserve.

Norma and Joseph grew a wide variety of produce on the land, from beef cattle to hay to vegetables. After Joseph passed away in 1968, Norma wanted to uphold his wish that "this land never be developed." She recognized the rampant development in the region was a threat to both the forest and the farmland, and was motivated to protect her land as a calm sanctuary for birds as a valuable food-producing resource.

"This is something we always told our children," Norma said, as quoted in Saving Farmland: The Fight for Real Food. "They grew up knowing this home was worth something more than what money could buy."

Norma donated her land for conservation in 2007, and continued to live on the farm until she passed away in 2011. Today, the Nature Conservancy of Canada (NCC) owns and stewards the Lohbrunner Woods Nature Preserve, while the farmland is held in trust with Farm Folk City Folk and stewarded by the Lohbrunner Community Farm Cooperative.

This property is one of 26 conservation properties transferred to NCC from the Land Conservancy of BC in 2015 in order to ensure their long-term protection. These property transfers were made possible with the assistance of the Government of Canada's Nature Conservation Program, the Province of British Columbia and the Fish and Wildlife Compensation Program.