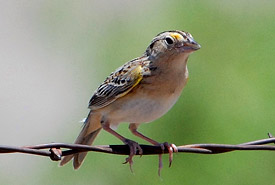 The Sage and Sparrow Conservation Area is a truly magnificent and nationally significant project in the South Okanagan Similkameen. The conservation area sits on the Canada-U.S. border near Osoyoos, protecting part of an international swath of rare grassland habitat and a crucial component of a migratory corridor for species moving between the desert areas of the western United States and the dry grasslands of interior BC.

This landscape has been of interest to the conservation community for decades, but it wasn't until 2012 that the Nature Conservancy of Canada and our partners had the opportunity to start creating the Sage and Sparrow Conservation Area. The ongoing conservation assembly quickly expanded — in 2013 and 2014 — to protect even more of the grasslands here. Most recently, in 2020, we added an expanse of higher elevation lands, which notably includes two large wetlands. Today Sage and Sparrow spans 1,500 hectares (3,750 acres) and is home to 62 documented species at risk. 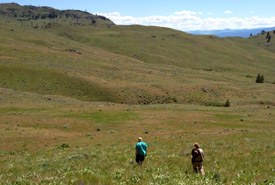 The diversity of habitats and wildlife found on Sage and Sparrow is what makes this conservation area both unique and incredibly important. Sage and Sparrow takes its name from the extensive sagebrush landscape it supports, plus the notable abundance (11 at last count!) of sparrow species found there. The land also supports pockets of trembling aspen that provide habitat for mule deer, ruffed grouse, magpies and two mouse species of conservation concern: western harvest mouse and Great Basin pocket mouse. Rocky outcrops provide cover for many species of snakes as well as other small mammals.

A magnificent canyon cuts through the southern portion of the conservation area and features a natural spring that runs year-round. Standing atop a viewpoint at the edge of the canyon, visitors are treated to a spectacular view of the Similkameen Valley south into the U.S. The northern reaches of the conservation area climb in elevation and grasslands give way to Interior Douglas-fir and ponderosa pine forests. Small lakes and wetlands are vital sources of water in this arid landscape, providing critical habitat for waterfowl and at-risk species, such as Great Basin spadefoot, western painted turtle and western tiger salamander. 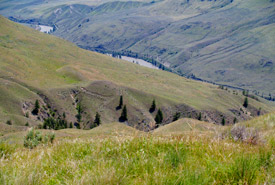 A canyon on Sage and Sparrow, BC (Photo by NCC)

All of these ecological systems are under significant threat of development and conversion to agricultural systems. The Nature Conservancy of Canada will continue to work with willing landowners in the area who wish to see their properties transferred into conservation and protected for the long term.

We welcome you to come out and explore Sage and Sparrow by foot. There is an easy to moderate network of roads that you can follow to discover the incredible richness of this grassland treasure. For more details about visiting Sage and Sparrow, visit NCC's Nature Destinations website.

Map to Sage and Sparrow >

Please tread lightly on these lands. No camping, fires or vehicles are permitted in this sensitive conservation area.

The Sage and Sparrow Conservation Area supports many iconic South Okanagan species and the fragile habitat that the depend on:

Sage and Sparrow Conservation Area shares a significant portion of its border with the South Okanagan Grasslands Protected Area. It forms an integral habitat link between protected areas that allow for the movement of species between the Similkameen and Okanagan Valleys.

This grassland ecosystem is one of the four most endangered ecosystems in Canada.

The area is home to a diverse range of amphibian, reptile, bird and mammal species. Some of these occur nowhere else in Canada, or the world.

Sparrow and other bird populations on Sparrow Grasslands have been extensively researched by the Canadian Wildlife Service. They have provided a wealth of ecological data that will further conservation management efforts.

We are grateful for the support of many groups and individuals who have supported this world-class conservation initiative, including: