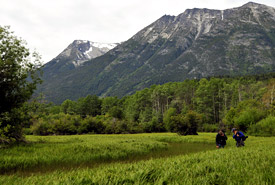 Dalton's Hideaway in the Klinaklini Valley, BC (Photo by NCC)

The Klinaklini River is one of British Columbia's wildest rivers. Fed by a watershed that spans almost 600,000 hectares, the river flows past immense mountains and vast ice fields, clear alpine lakes and rich wetlands. It also passes through vibrant forests and peaceful meadows. Finally, it squeezes through an impossibly narrow canyon and empties into a long, deep coastal fjord on BC's central coast.

The Klinaklini passes through some of the best of the remaining wilderness in southern BC. Its clean waters nurture a wide range of species, including bull trout, salmon, grizzly bear and moose.

Springing from a small lake high in the Pantheon Range, the river initially flows north. Then, it turns west for a few miles when it hits the Chilcotin Plateau, before it turns south to make its way to the sea. Along the way, the river passes through 14 biogeoclimatic zones, creating an abundance of biological diversity and ecological variation as it descends past the Silverthorne glaciers and soaring Mount Waddington to its estuary in Knight Inlet. 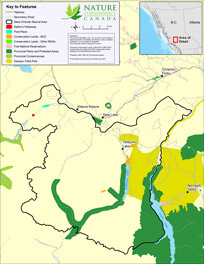 Tucked away in the wilds of the upper Klinaklini Valley are three properties — the only private parcels of land in a 34-kilometre stretch of the valley. Two of these lands are protected by the Nature Conservancy of Canada (NCC). These lands have been used over the ages by bear, moose, beaver and migratory birds. Hunters, hermits and outlaws have also used them.

The flat, open valley of the upper Klinaklini is carved with dozens of river oxbows and old beaver ponds. This creates extensive wetland habitats. Warm, wet meadows of tall grass and sedge are edged by willow, cottonwood and alder — perfect for moose and muskrat alike. Seasonal floods can cover these flats in up to four feet of water. The habitat in this valley is so rich that it is easy to find lots of evidence of grizzly bear, wolf, mule deer and bull trout, as well as giant old-growth aspen and cottonwood trees. The valley is also home to cougar, trumpeter swan, wolverine, otter and many other fur-bearing animals. 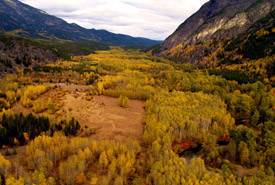 Poet Place in the Klinaklini Valley, BC (Photo by NCC)

Two waterfalls on the river bookend Poet Place, between which the Klinaklini snakes back and forth in several oxbows. The habitat on the property is divided between deciduous, riparian (riverbank) woodlands and dry coniferous forest.

A small agricultural field and the remnants of an old homestead pay tribute to past attempts to eke out a living on the wild property. But nature is quickly reclaiming this land. Aside from occasional visits by NCC staff, the property will be left largely to the wildlife that flourish here. 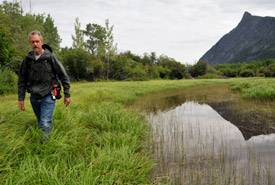 With a name inspired by a colourful local legend, Dalton's Hideaway is a 65-hectare property that straddles the banks of the Klinaklini River. The property is rumoured to have been a hideout for members of the notorious Dalton gang in the late 1800s. Remnants of their cabin, built from massive aspen logs, can still be seen just beyond the property line, where it is slowly being reclaimed by the forest.

Dalton's Hideaway is the furthest downstream of all the private properties in the Klinaklini watershed. As a result, the conservation of this single property significantly reduces the risk of development and protects a much broader portion of the watershed. The result is a continuous stretch of wilderness from Knight Inlet in the Great Bear Rainforest, through the Coast Mountain Range and toward the Chilcotin Plateau.

The conservation purchase of Poet Place and Dalton's Hideaway was made possible by generous funding from the Estate of Duncan Donald McGeachy.

NCC's work in the Klinaklini watershed is an extension of our conservation efforts in the neighbouring Tatlayoko Valley, where we have protected key private lands in a relatively undisturbed and intact natural environment.

Why the Klinaklini is important

The Klinaklini River forms a corridor between the Great Bear Rainforest on BC's central coast and the dry Chilcotin Plateau in BC's Central Interior. This corridor is a critical path for wide-ranging species, such as grizzly bear and migratory birds, that travel between the two distinct areas.

During NCC's conservation planning for the Central Interior, portions of the Klinaklini watershed were identified as areas of high conservation value. The minimal human footprint in this remote area, coupled with existing protected areas, make the entire valley an important refugia for a wide array of wildlife.

Much of the Klinaklini watershed is formally protected through Conservancy designation under the Park Act of British Columbia. The estuary and lower river fall within the Great Bear Rainforest and are specifically protected by the Dzawadi/Klinaklini Estuary Conservancy and the Dzawadi/Upper Klinaklini River Conservancy. Portions of the middle river are also designated as protected areas by the province. However, the upper portion of the Klinaklini currently has no protection and is vulnerable to resource development and recreational incursion.