A sign at Sage and Sparrow Conservation Area (Photo by NCC) 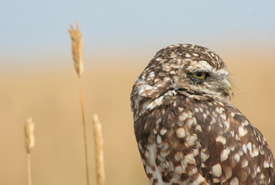 From desert grasslands to forested mountains, the South Okanagan Similkameen natural area is important for its cultural and conservation values. The dry, warm climate, with winter temperatures moderated by lakes that dot the valleys, is perfect for the many orchards and vineyards scattered across the southern interior.

The natural area is located on the southern edge of British Columbia, with the Sage and Sparrow Conservation Area directly on the Canada/U.S. border. The grassland ecosystem found in this natural area is one of the four most endangered ecosystems in Canada. The grasslands and watersheds in this region act as important corridors for wildlife that migrate between the interior of BC and desert areas of the western U.S. Many species found here are vulnerable or endangered, including the burrowing owl, American badger, sage thrasher and tiger salamander.

The South Okanagan Similkameen natural area is located in the traditional territory of the Okanagan Nation.

The valley bottoms of the South Okanagan Similkameen support high diversity. They are also the most attractive for development. For areas like this, where large stretches of protected land provide rare safe passage for migratory birds and terrestrial wildlife, habitat fragmentation is a significant threat. Several species have already disappeared from this area.

As European settlement began to increase in this area in the mid-1800s, agricultural and residential development also grew. The abundance and diversity of resources have long attracted a variety of interest groups to the region, including many conservation partners.

The Nature Conservancy of Canada began collaborating with conservation partners in the area in 1998. Working together, they have implemented projects to restore grassland ecosystems and reintroduce native wildlife species to the area. 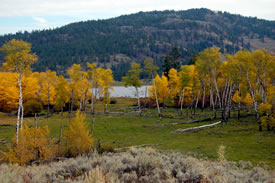 This birder's paradise is nestled on the Canada-U.S. border, a short drive from Osoyoos. Old roads lead hikers through a rich landscape full of spectacular views. Learn more>