How to burn a meadow 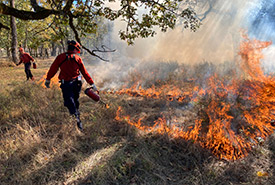 It is a dewy morning in late September. Sunlight is pouring through the canopy of Garry oak trees onto the mix of native and invasive grasses, forbs and shrubs below. As people arrive, the calm energy of the rising sun builds into a palpable excitement for the day.

Today is a day many, many years in the making. It marks the Nature Conservancy of Canada’s (NCC’s) third large-scale prescribed burn at the Cowichan Garry Oak Preserve, the NCC’s flagship conservation area in the Cowichan Valley on Vancouver Island. With its unique biodiversity values, this land supports plant species that are found nowhere else in British Columbia, let alone in Canada.

The Garry oak (also known as Oregon white oak) is a broadleaved deciduous hardwood tree unique to the Pacific Coast, found in southwestern BC through to south-central California. These trees are a notable feature of Garry oak ecosystems, which are endangered in Canada. After almost two centuries of fragmentation, loss and degradation, less than five per cent of this ecosystem still exists in Canada. Today, Garry oak ecosystems can only be found on southeastern Vancouver Island, adjacent Gulf Islands and two isolated locales in the Fraser Valley.

The woodlands and wildflower meadows typical of Garry oak ecosystems rely on the occasional low-intensity fire to burn away encroaching shrubs and trees. Historically, lightening would start some fires naturally. More common was the intentional use of fire by Indigenous communities. For centuries, Coast Salish Peoples burned Garry oak meadows to promote the growth of edible root crops — notably camas — and to eliminate competing shrubs and trees. This burning also enhanced food for deer and elk, which supported hunting and reduced insects, pests and diseases. 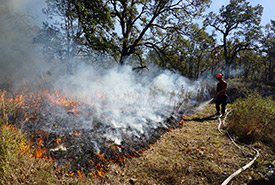 Historical accounts, tree ring analysis and charcoal residue in fossilized sediments tell a story of regular and consistent fires burning in the late summer and fall, dating back thousands of years. European settlement of the mid-1800s introduced widespread fire suppression, which, along with land conversion, led to a significant loss of Garry oak ecosystems and the unique plants and animals that rely on it. Remaining Garry oak meadows were steadily filled in with shrubs and forest trees (particularly Douglas-fir).

Prescribed burns as a management tool

The exclusion of fire is one of the most significant barriers to successfully managing and maintaining what remains of Garry oak ecosystems. Today, land managers are looking at ways of reintroducing fire to the landscape in order to avoid further loss of Garry oak meadows, and to enhance the natural resiliency of this unique ecosystem. Additionally, acknowledging the role that a build up of fuel (e.g., branches) played in the devastating BC wildfires of 2017 and 2018, the BC Wildfire Service is returning fire to the landscape, with intention and control, as a way to reduce the chance of catastrophic wildfire.

Years of research, years of waiting 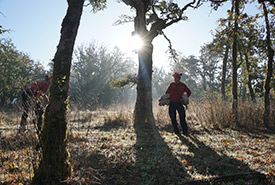 Years of research, planning and relationship-building led to the success of our prescribed burn at the Cowichan Garry Oak Preserve on September 29, 2020. Members of the Cowichan Tribes have contributed their knowledge and shared the local cultural context of using fire to enhance and manage these meadows. In addition to re-establishing regular controlled burns, NCC is working with Cowichan Tribes to enable other traditional practices that continue to shape the land here, including the harvest of traditional foods such as camas.

Scientific research about the use of fire in Garry oak ecosystems has been underway at the preserve since 2000, in partnership with Andrew MacDougall of the University of Guelph and the Institute of Applied Ecology in Corvallis, Oregon. Initially, fire treatments were carried out in experimental plots to test the use of fire to control invasive plant species, remove encroaching shrubs and conifer trees, support native species, and maintain the open meadow or savannah structure of the landscape. These experiments were scaled up in 2013 and 2014 to a landscape-level, in which up to two hectares were burned at one time. The plan was to repeat the burns every two years; however, unfavourable weather and unavailable fire crews scuttled burn plans for the next six years.

In 2020, the fire-free spell at the Cowichan Garry Oak Preserve finally broke. Over the summer we worked with the BC Wildifre Service to prepare a burn plan, which outlined not just where we would burn, but also how we would execute the burn, how we would maintain safety and what the desired ecological outcomes would be. As the dry summer season was coming to a close, it seemed as though another year would go by without a burn. But then late September gave us a day where the weather and atmospheric conditions were just right. We didn’t hesitate to set the plan in motion.

How to burn a meadow 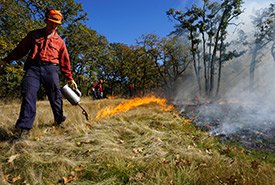 The day before the fire crew gathered in the morning sun, the burn areas were prepared by mowing grass strips around the boundaries and removing woody debris to limit the fire’s spread, intensity and duration. As the sun approached its zenith, staff from NCC, the BC Wildfire Service and the Maple Bay Fire Department, as well as a few dedicated NCC volunteers, gathered for a safety and fire protocol meeting. The group of about 15 was waiting for the heat of the midday sun to evaporate the lingering dew and ensure the grass would catch, burn and carry the fire. With land and people prepped, the propane drip torches were lit and first lines of fire laid at 12 p.m.

As the fire burned, BC Wildfire Service staff were stationed with rakes and hoses to control the edge of the fire. Special attention was paid to protecting any trees within the burn area while ensuring the fire had no opportunities to spread beyond the boundaries of the burn area. With dry grass as the only fuel, the fire burned quickly — the time between ignition and "mop up" is only about 45 minutes for each burn area. The charred grass will add nutrients back into the soil, feeding the meadow and fueling an abundant wildflower bloom next spring.