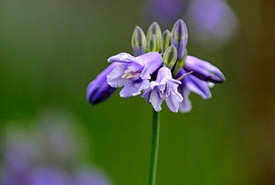 The delicate flowers of Howell’s triteleia grace the Nature Conservancy of Canada's (NCC’s) Cowichan Garry Oak Preserve (CGOP) every year in late spring, covering the meadows with a dusting of purple. The flower grows from a type of bulb called a "corm," which supports a stalk 20 to 50 centimetres tall. It was historically used as a source of food by the Cowichan tribes. However, as Garry oak ecosystems continue to dwindle, so has this tiny perennial herb. Today, there are only nine confirmed sites with Howell’s triteleia populations throughout British Columbia.

The decline of Howell's triteleia has earned it status as both a nationally and provincially endangered species. The ongoing spread of invasive plants is a chief concern, as shrubs such as Scotch broom viciously outcompete Howell’s triteleia in Garry oak habitats. In 2016, the total number of flowering plants in the preserve was just over 400. At its lowest, the number of individual flowering plants dropped down to 200. However, it appears that the population of Howell's triteleia refuses to be kept down.

In 2018, there were an estimated 600 individual flowering plants thriving in a single restored section of the preserve alone. The good news doesn’t stop there! In any given year, an additional 200–300 per cent of Howell’s triteleia might not flower, instead saving their energy until they are more mature or better conditions arise. Luckily for Howell’s triteleia, NCC has a dedicated team on its side. Since beginning to manage the preserve in 1999, NCC has been hard at work restoring the natural values of the meadows. As one of the last intact deep soil Garry oak meadow ecosystems in the world, CGOP is a haven for native and endangered species, including the western bluebird, yellow montane violet and chocolate lily.

NCC’s long-term project of removing Scotch broom, along with other invasive species, has transformed the land into a space where native plants can thrive. In recent years, NCC has also used prescribed burns to control the spread of agricultural grasses that can smother native wildflowers. It’s thanks to the efforts of a dedicated team of NCC staff and volunteers, we are beginning to see what will hopefully be just the beginning of the story of successful recovery for Howell’s triteleia.

“Howell’s triteleia is on the edge. It's a canary in the coal mine of the Garry oak ecosystem, so to speak,” says Irvin Banman, a steward of the Cowichan Garry Oak Preserve. “If we can strengthen the individual plants and the population generally, we may see an increase in seed viability as well.”

NCC’s Cowichan Garry Oak Preserve has played an integral role in ongoing efforts to reintroduce native species of all kinds to the Cowichan Valley. The preserve continues to be a hotbed of research for many biologists and a place for people to come together to steward the lands.

NCC relies on volunteers' generosity of time and support to steward lands like CGOP. Are you interested in becoming more involved? Visit NCC's Conservation Volunteers site to learn about future opportunities to become involved with restoration efforts at CGOP.