www.natureconservancy.ca > Home > Where We Work > Manitoba > Faces of NCC > Our Donors 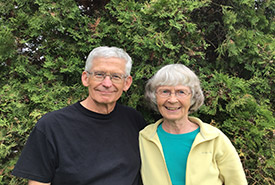 Jean Britton was a graduate psychology student at the University of Regina and a self-described “city girl” when she learned something that left her feeling hot under the collar.

“I studied social sciences and gathered a lot of knowledge about what we were doing to the Earth,” she remembers. “It kind of got me irritated, angry even, at my generation. We should be protecting nature, not destroying it.”

More than 2,000 kilometres and two provinces away in London, Ontario, Western University PhD candidate Ransom Slack was cultivating an equally passionate stand about the environment.

“As a philosophy of science student, I was very concerned about loss of habitat and what that meant to the beings we were sharing the planet with.”

Separately, each vowed to do something to make a difference.

Together, and for the last 17 years, they’ve done exactly that as generous supporters of the Nature Conservancy of Canada (NCC).

Jean and Ransom’s contributions, which began in 2003, include a gift of shares; support for The Weston Family Tallgrass Prairie Interpretive Centre in the Manitoba Tall Grass Prairie Preserve, 80 kilometres southeast of Winnipeg; and supporting the securement of hundreds of hectares of wildland in the southeastern part of the province. These lands are home to wetlands and forests, American beaver, black bear, sandhill cranes, and species at risk, including golden-winged warbler, black ash and northern leopard frog.

Now retired, they are also part of NCC’s Conservation Volunteers program. “We helped to plant the wildflower garden at the Weston Interpretive Centre,” remembers Jean.

But it is their efforts to instill a respect for nature in their three grandsons, two 13-year-olds and a 10-year-old, that gives them the greatest pleasure. “We’ve taken the boys on local hiking trails since they could walk,” says Ransom.

“Sauntering through the woods and sitting on a bench simply listening to the wind in the trees and watching the birds at the feeders — these are the moments I cherish,” adds Jean. “We’re trying to teach them a sense of responsibility for nature and let them know about organizations like NCC that are doing great work.”

Is their message being heard?

"It sure is," laughs Jean. "As summer hikers and competitive cyclists, they know the value of preserving our natural habitat. And, our nature walks continue."