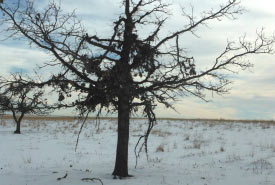 The Lower-Qu'appelle-Assiniboine-Quill Lakes Natural Area (LQAQL NA) is an important part of the Prairie Parkland Ecozone. The natural area is within southeast-central Saskatchewan and extends along the Assiniboine River in Manitoba from Lake of the Prairies to Brandon.

The LQAQL NA is an area of relatively high biodiversity within the Aspen Parkland because it encompasses an ecological gradient between the bur oak-dominated parkland to the east and the pure aspen parkland to the west. The natural area covers a broad plain interspersed with deep valleys and hummocky, morainal uplands, including the Touchwood Hills, which extend southward from Wynyard and Foam Lake, reaching elevations that range from 600 metres to 730 metres.

Wetlands and streams support shorebirds, waterfowl and other aquatic species and further enhance the ecological value of the natural area. Important streams and associated tributaries, including the Assiniboine and Qu’Appelle rivers, act as important corridors for animal and plant movement across the landscape. The valleys carved from the Assiniboine and Qu’Appelle Rivers support a diverse landscape of aspen and aspen-oak parkland, grassland slope communities, and a diversity of wetland and riparian habitats. The natural area also contains wind-blown sand complexes, which is an ecologically distinct habitat that supports nationally and provincially rare species.

The LQAQL NA supports 31 species at risk and four globally rare species. There are three Important Bird Areas (IBAs), including the Ellice-Archie and Spy Hill-Ellice community pastures, which straddle the Saskatchewan-Manitoba border. The flat open grassland on the pastures cover some of the largest remaining intact mixed-grass prairie in Manitoba and support important habitat for native grassland-dependant species, such as chestnut-collared longspur and Sprague’s pipit.

The Nature Conservancy of Canada's (NCC's) work in the LQAQL NA supports the robust wetlands, rivers and streams, which regulate cycles of water and facilitate the movement of animals and plants through a shifting mosaic of grasslands and forests. Our conservation activities work with agricultural and recreational economies to maintain pristine, weed-free areas through targeted securement projects, educational outreach, compatible management practices and partnerships with other agencies. We hope to ensure the native plant communities continue to support a diversity of animals and continue to provide a connection to our natural work for our children and grandchildren.