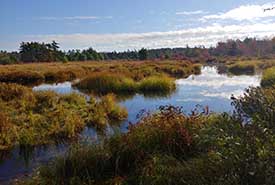 Southwestern Nova Scotia is recognized as a UNESCO-designated Biosphere Reserve.

There is currently an opportunity to protect important and unique habitat for future generations of Nova Scotians.

Rare and at-risk species are found in this area, such as Blanding's turtle, eastern ribbonsnake, Canada warbler, olive-sided flycatcher, and several plants grouped in the Atlantic Coastal Plain Flora.

One of Canada’s most diverse forest types is the Acadian forest. An old-growth forest of this type is rare in Nova Scotia but offers significant habitat for wildlife. Forests store and purify rainwater, prevent erosion and provide a buffer to inland areas during storms. This habitat also supports endangered species, such as black bear, barn swallow and Nova Scotia mainland moose.

The wetlands and lakefront shorelines also provide important habitat for rare and at-risk species. The freshwater shorelines of lakes and rivers are home to the Atlantic Coastal Plain Flora; a group of 90 different species of wetland plants, some of which occur nowhere else in Canada, except in Nova Scotia. Eleven of these plants are at risk, including rose coreopsis and plymouth gentian. Without conservation and recovery efforts they are at risk of extinction. 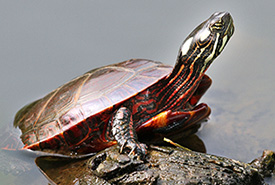 Two sites, one near Parr Lake and the other near Upper Ohio, consist of Acadian forest, lakeshore habitat and freshwater wetlands.

Near Upper Ohio, the properties available total 1,093 hectares, west of the Tobeatic Wilderness Area. This project will protect over 25 kilometres of lake shoreline, old-growth Acadian forest and freshwater wetlands. These wetlands provide habitat for rare plants, like Virginia meadow beauty and swamp loosestrife, and turtle species, including eastern painted turtle, which has been observed on the property.

The Parr Lake property is 119 hectares, with one kilometre of lakefront. It features wetlands and a largely intact Acadian forest. The native forest of the Maritimes, Acadian forest at this site is a mixture of sugar maple, white ash, red spruce, yellow birch, red maple, eastern hemlock and American beech. Some of the trees are estimated to be 80 to 100 years old.

Double your impact; your gift will be matched dollar for dollar!

For more information about new opportunities and to learn how you can help, please contact NCC's Atlantic Region at 1-877-231-4400 or atlantic@natureconservancy.ca.