In Search of Wood Turtles 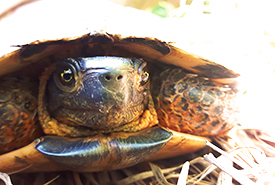 When it comes to animals at risk in Nova Scotia, wood turtles often make it to the top of the list: highest of priority to be protected. With their large eyes and cute faces, these funny-looking reptiles face many threats.

Now a master's student of environmental studies at the School for Resource and Environmental Studies at Dalhousie University, Thomas Baker started his role with the Nature Conservancy of Canada (NCC) in the summer of 2020 as the Dr. Bill Freedman Conservation Intern. A fund was established to host this annual internship in honour of the late Dr. Freedman, a professor at Dalhousie University and an avid NCC supporter and board member. Thomas started creating tools to help find the location of wood turtles within Nova Scotia.

Along with in Nova Scotia, wood turtles can also be found in Ontario, Quebec and New Brunswick. You can observe these turtles enjoying the sun or lounging near rivers and streams in June, July, August and September. Just remember to keep your distance and to not disturb them as they relax in the sun. As Thomas puts it, "The turtles need the sun just as humans need their morning coffee to wake up." Wood turtles cannot generate heat internally to warm up and maintain a constant body temperature. And so, they look for any opportunity to catch some sunshine in the morning as the temperatures increase.

Life as a wood turtle might sound like it's a beach, punctuated by a few enjoyable months of sunbathing. Unfortunately, the data shows otherwise. Due to a variety of factors, wood turtle populations are declining. Agricultural practices, loss of habitat due to development, human disturbances, being illegally collected as pets and speeding vehicles are serious threats. Thankfully, with extensive research, individuals like Thomas are finding effective ways to bring their populations back to a healthy state.

With the help of his supervisor at NCC, Patrick Nussey, and through collecting different data, Thomas built a species distribution model. The model simplifies the real world and helps determine the best habitats for wood turtles. The model also narrows down the specific spots where wood turtles may be observed across Nova Scotia.

Why wood turtles, you might ask? Thomas explains: "I spent my undergraduate years studying at-risk birds, but I have always been interested in helping all endangered animals. I began studying wood turtles to help with the protection of these at-risk species." Unfortunately, their cute and funny nature makes them very tempting to capture and keep as pets. However, Thomas notes that removing them from their natural habitat will disrupt their life cycle. It is illegal in Canada to own a wood turtle because they are an at-risk species. In Nova Scotia, it is illegal to own any turtle without a permit. This law was created to deter people from abandoning their non-native turtles in the wild, which disrupts native species.

During his internship, Thomas came across some challenges, such as finding correct, usable environmental data. While Nova Scotia and New Brunswick, along with the government of Canada, are getting better at providing accurate data, Thomas notes that the system could be further improved. Other than these technical difficulties, the rest of his internship involved observing beautiful wood turtles and gaining knowledge and experience from his supervisor.

For Thomas, getting out in the field and learning hands-on were the most valuable takeaways from his internship with NCC. In addition, joining webinars and organizational meetings enriched his knowledge of the workplace and prepared him for bigger steps in his career, like completing his master's degree.

Working in the field also presented Thomas with some meaningful moments like finding a baby wood turtle. One day out in the field, as he was walking along the top of a bank in a winding river in rural Nova Scotia, he spotted a tiny wood turtle the size of a loonie! He slowly approached the little turtle and brought it to a spot where it could be measured. After being measured and photographed, it was released back to where it had been found. Thomas and his teammate were delighted to have found a baby wood turtle as it is a rare occasion to find one that young.

Thanks to the generous donations and constant support of funders, interns like Thomas are able to gain meaningful experiences every year.

There are a few online resources for anyone passionate about turtles. Turtle Patrol, a Facebook group, shares interesting facts and finds along with photos of different turtles. In addition, an outreach program by the Clean Annapolis River Project provides great learning opportunities and ways to help support turtles.