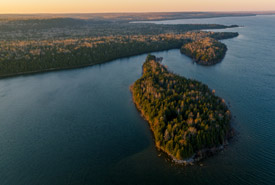 That’s why he and the 2,500 American and Canadian members of the U.S.-based Great Lakes Cruising Club agreed to award a US$20,000 grant to the Nature Conservancy of Canada (NCC) in April 2021. Their contribution through the club’s Great Lakes Foundation is helping protect a stretch of shoreline along the North Channel of Lake Huron, a world-renowned boating destination known for its pristine beaches and shorelines.

“Over the last 10 or 15 years, the attitude toward conservation has shifted,” says Rich a long-time boater and the foundation’s president. “[As boaters,] we’ve come a long way, but we need to go even further.”

The foundation’s grant was directed to NCC’s Vidal Bay Forests and Shoreline project, a $16-million effort to protect and care for 18.5 kilometres of shoreline on Manitoulin Island. Now secured, Vidal Bay Forests and Shoreline represents one of NCC’s largest single property acquisitions in Ontario. It contributes to a protected area complex of more than 248 square kilometres of forests, wetlands and shorelines, the largest area of its kind south of the Canadian Shield in Ontario.

“What struck us most about this project was the fact that it will last forever. This isn’t a one-time study or an infrastructure project; it’s an investment that will last for generations,” says Rich.

That and the fact that the potential impacts are borderless. Conserving an area of this size near the Canadian-U.S. border will benefit water quality, offer a safe stopover site for migrating birds and address climate change and the biodiversity crisis — priorities shared by both countries.

If that wasn’t enough to seal the deal, Rich and his club colleagues were also delighted to learn that the Great Lakes Foundation grant was matched 3:1 through the North American Wetlands Conservation Act grant program (NAWCA), turning their US$20,000 into an $80,000 investment. Through NAWCA, each U.S. dollar donated to NCC for projects like Vidal Bay that protect wetlands in Canada, can leverage an additional $3 ($2 from the U.S. federal grant program and $1 from an additional Canadian-sourced match).

In supporting NCC, “we are taking a bold stand,” Rich declares. “We are boaters who understand conservation.”