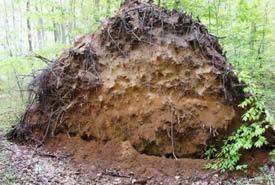 Tip ups are important natural features that create opportunity on the forest floor. They bring new life to fallen trees.

Wildflowers, trees and shrubs will take advantage of the disturbed soil and new-found sunlight, while insects such as carpenter ants and beetles quickly move in to feast on the protein-rich bark. The depressions left in the ground from uprooted trees provide small catchment areas for spring runoff, creating seasonal wetlands that provide breeding grounds for amphibians.

Trees such as American beech and oak grow on dry mounds, while plants like northern spicebush and common buttonbush survive in wet pits.

Sugar maple and tulip tree fill the gaps in between.

Tip ups are also known as "pits and mounds." The pit is formed from the uprooted root mass, while the mound forms over time as the roots begin to decay.

Pit and mound topography is characteristic of old growth and mature, relatively undisturbed forests such as Backus Woods. In forests that have remained untouched from human activity, the ground topography will be highly uneven from this natural process. 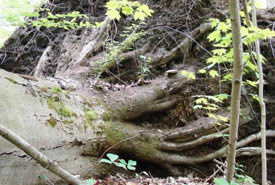