Backus Woods, ON (Photo by Neil Ever Osborne) 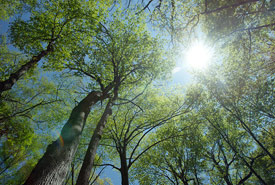 In southwestern Ontario’s Norfolk County lies an incredible natural oasis known as Backus Woods. This spectacular older-growth forest is home to some of the oldest living trees in Ontario and is one of the best remaining examples of Carolinian forest in Canada. A haven for species at risk, Backus Woods provides important habitat for prothonotary and cerulean warblers, Louisiana waterthrush, eastern foxsnake, Blanding’s turtle and Jefferson salamander.

For generations, people near and far have grown up exploring the forest paths, swamps and streams of Backus Woods. For many, it was where they discovered a love for the natural world. For others, it is where they go to relax and recharge. The forest’s roots grow deep within the community.

In 2016, the United Nations Education, Cultural and Scientific Organization (UNESCO) recognized Backus Woods as an ecological site of global importance by approving the addition of Backus Woods to the core of the Long Point World Biosphere Reserve. 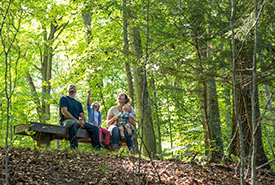 The area is one of the most biologically diverse regions in Canada. It is also one of the two areas supporting the highest densities of species at risk in the country. The Norfolk area alone supports 60 species considered at risk nationally under the Species at Risk Act. In addition, 221 provincially rare species are found here.

Explore the forest with the Weston Family Trail

NCC has installed interpretive signs throughout Backus Woods and on 30 signposts, quick response tags (QRs) link smartphone users to enhanced content.  You can take a virtual tour of some of the features of Backus Woods by clicking here. Click on the trail map below for a larger version. 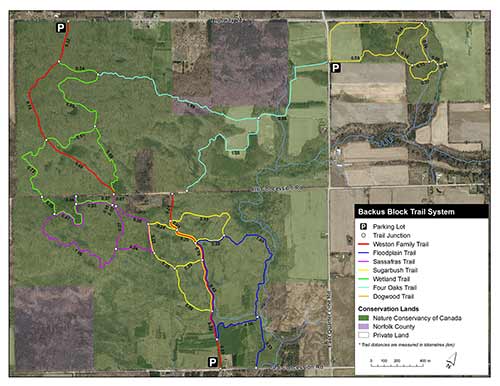 For individuals with mobility challenges, motorized tours are also offered throughout the year. For more information, visit the Backus Woods Nature Destinations page.

NCC acquired Backus Woods in 2011, and has been caring for and enhancing this unique habitat and beloved conservation destination ever since, thanks to the generous support of the Weston Family Foundation, TD Bank Group through the TD Forests Program, and the Government of Canada, through the Natural Areas Conservation Program.