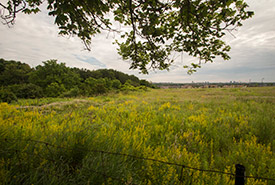 When the late Lyn and Robert MacMillan donated their land to the Nature Conservancy of Canada (NCC) in 2004, it was a farm surrounded by other farms in the sleepy community of Maple. Little did the MacMillans know that in just 13 years their beloved farm would become a natural oasis in a sea of urban development in the rising city of Vaughan.

The 50-hectare (123-acre) collection of forest, field and stream is a haven for native plants and animals. The property is one of the largest greenspaces remaining on the southern section of the Oak Ridges Moraine in York Region. It also protects the local watershed, which includes an important headwater tributary of the Don River.

The Don River, which flows through the heart of Toronto, is one of Canada’s most degraded urban rivers. Current population projections suggest that by the year 2021, the Don River watershed will be 91 per cent urbanized.

The MacMillan Nature Reserve provides a refuge for many species, including deer, snowshoe hare, muskrat, bobolink, wood thrush, pileated woodpecker, northern leopard frog and monarch. The clear, cool water of the property’s stream is also home to the rare redside dace, an endangered fish that has been extirpated (made locally extinct) from the lower reaches of the Don and other nearby urban streams. 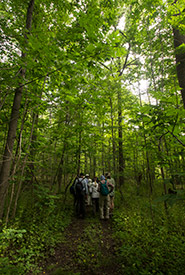 In the heart of the reserve lies the original MacMillan farm, now owned by the City of Vaughan. NCC and city staff are collaborating to jointly plan for the management of these two significant greenspaces.

NCC is also working with the Toronto and Region Conservation Authority and the City of Vaughan to restore stream habitat on the reserve. So far, an old dilapidated dam was removed, and culverts that interfere with natural stream flow were removed or improved to allow fish and other species to move more freely.