Whitefish Lake, ON (Photo by NCC) 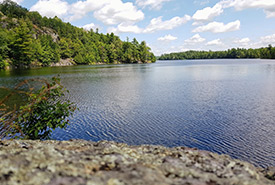 Whitefish Lake, ON (Photo by NCC)

Along the shores of beautiful Whitefish Lake in the Frontenac Arch are 48 hectares (120 acres) of pristine wilderness. Located on the Rideau Waterway east of Loughborough Lake, this collection of stunning granite ridges, rich forests and 2.5 kilometres of shoreline support a wide variety of plant and animal life, including waterfowl such as mallard, ring-necked duck and wood duck.

A unique property, Whitefish Lake features trees more commonly found in the Appalachian Mountains to the south, such as pitch pine, shagbark hickory, rock elm and black maple. Several rare and at-risk plant and animal species have been observed near this natural gem. It is also home to wide-ranging animals like fisher and black bear.

In late 2017, the Nature Conservancy of Canada (NCC) put out a call to the public to help protect this spectacular natural area. Many donors — both local and across Ontario — stepped up to help. A big thank you to all the individuals, groups and organizations that made this project possible.

Large, intact properties like this are just the kind that NCC is looking to acquire and conserve in the Frontenac Arch. By purchasing this property, and others like it in the area, we are helping to protect a wilderness corridor that is essential for numerous species.

The project was generously supported by funding from the Government of Canada, through the Natural Areas Conservation Program.

The Frontenac Arch is the southern-most extension of the Canadian Shield, extending from the Algonquin Highlands of Ontario to the Adirondack Mountains of New York. This rugged landscape was settled after the War of 1812 but was ill-suited for agriculture. Most of the farms carved from the forest have returned to nature and this is now the most heavily forested landscape in southern Ontario. It is also the most vital link in the last remaining intact forest corridor in eastern North America.

The Frontenac Arch is a unique area of biogeographic overlap between the northern Canadian Shield forests and southern Appalachian influences, supporting a great richness of plant, insect and animal species and making this one of the most biodiverse regions in Canada, and a place of great beauty. The Arch serves as a funnel for migrating birds, bats, and insects, and animals with large home ranges such as the fisher, black bear and bobcat.

The Frontenac Arch’s incredibly rich natural environment and history was recognized in 2002 when it became a UNESCO World Biosphere Reserve, part of a world-wide network of 669 Biosphere Reserves in 120 countries.