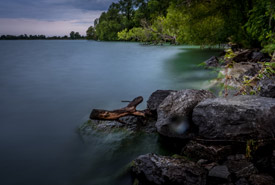 The Eastern Lake Ontario Coast Natural Area is home to provincially, nationally and even globally significant habitats and species. It contains a rich mosaic of coastal wetlands, forests, streams, sand beaches and globally rare communities, such as alvars and sand dunes. This area has world-class freshwater coastline and provides critical habitat for waterfowl, grassland and migratory birds, and butterflies. The Natural Area has vast ecological values and provides a multitude of ecosystem services, making it a high priority for conservation.

The landscape has a long history — both human and natural. Lands around eastern Lake Ontario are on the traditional territories of the Anishinaabe and Haudenosaunee Peoples. With gratitude and respect, we acknowledge the significant contributions Indigenous Peoples have, and continue to make, on these lands. 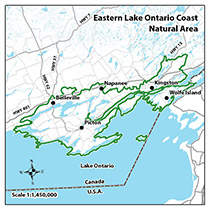 The Eastern Lake Ontario Coast Natural Area stretches from just east of Brighton and Presqu’ile Provincial Park across the shoreline past Kingston to just west of Gananoque, and south to include Prince Edward County, associated coastal islands and a portion of the waters of Lake Ontario. The Eastern Lake Ontario Coast is in the Mixedwood Plains Ecozone, the southernmost and most densely populated ecozone in Ontario accounting for 8.6 % of the province (Crins et al. 2009), and the Lake Simcoe – Rideau ecoregion (6E). The Natural Area also includes world-class coastline providing critical habitat for migratory birds.

Together with our partners, NCC has helped to protect 713 hectares (1,762 acres) in this area. Protecting and restoring contiguous habitats along the natural corridors remains a high priority, especially as these areas become more developed. Where appropriate and possible, we manage trail systems on our properties, allowing people to explore and experience the benefits of nature. Visitors can enjoy light recreational activities such as hiking, birdwatching, cross-country skiing and snowshoeing.

Looking ahead, we are concentrating our conservation efforts in the following priority areas: Brighton Wetland, Prince Edward County and Wolfe Island. 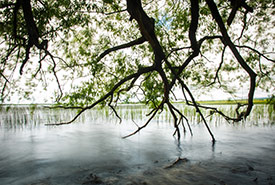 In 2018, NCC and Ducks Unlimited Canada came together with other partners and supporters to protect 93 hectares (229 acres) of the Brighton Wetland. Located just east of Presqu’ile Provincial Park, this large, intact coastal wetland is part of the Presqu’ile Bay Wetland Complex, a Provincially Significant Wetland, and the Presqu’ile Bay Important Bird Area (IBA) — an area that is globally important for bird conservation using internationally agreed upon scientific criteria.

The south shore of Prince Edward County has exceptional conservation value due to the habitats and species it supports. It is designated as an Important Bird and Biodiversity Area (IBA) — an area that is globally important for bird conservation using internationally agreed upon scientific criteria. The South Shore IBA encompasses about 30 kilometres of shoreline, the only lengthy, undeveloped strip of shoreline remaining in Prince Edward County and one of the few shorelines of Lake Ontario that has remained undeveloped. It provides vital staging and stopover habitat for migratory birds, and the surrounding area provides habitat for bat species including big brown bat, silver-haired bat and eastern red bat. 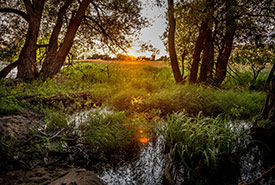 At the eastern end of Lake Ontario and the top of the St. Lawrence River, Wolfe Island is a stopover site for migratory birds. This island is the most easterly of the Great Lakes islands and the largest island in the Thousand Islands archipelago. Known as Ganounkouesnot, meaning Long Island Standing Up to the Tyendinaga Mohawk Nation, Wolfe Island is a place of biological, historical and cultural significance. 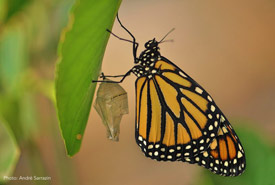 Like so many other natural areas across the province, invasive species continue to be a primary threat here. Eradicating these species, which crowd out native plants and alter habitat, is one of NCC’s goals for the area. Each year, NCC staff, partners and volunteers work hard in the forests, wetlands and lakes of the natural area, removing species such as dog-strangling vine, European buckthorn, wild parsnip and phragmites. NCC also promotes awareness through workshops and the media to encourage the public to help reduce the spread of invasive species.

The conservation of Eastern Lake Ontario Coast Natural Area is not something we can achieve on our own. Only through strong partnerships can this unique area continue to grow and thrive. NCC would like to thank the following partners for their generous support of our ongoing efforts in this natural area: