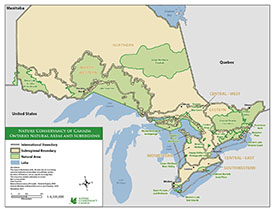 The Nature Conservancy of Canada's (NCC's) on-the-ground work is led by a team of conservation science professionals who work to identify, plan and execute the protection of the best of Canada's natural spaces.

While we strive to work to protect as many of Canada's unique habitats as possible, we focus our conservation work in priority areas, identified through science-based planning initiatives. These are areas where species and ecosystems face the greatest threats. In Ontario, we work in 17 priority natural areas. Together, these landscapes span the wide range of habitats and ecosystems that make Ontario unique.