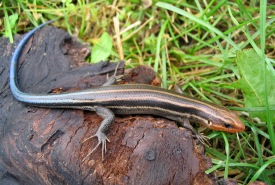 Located in the southwest corner of Ontario lies a rich collection of Carolinian forests, wetlands, prairies and Lake Erie shoreline. NCC’s Essex Forests and Wetlands Natural Area is an area of important biodiversity bordered by Lake Erie to the south, the Detroit River to the west and Lake St. Clair to the north.

The Essex Forests and Wetlands Natural Area is part of Carolinian Canada — a region that supports over 2,200 plant species, including 70 types of trees and over half of Canada’s bird species. The natural area’s 90,031 hectares (222,466 acres) are home to more than 75 species at risk, 11 of which are globally rare. The area also includes Provincially Significant Wetlands, Areas of Natural and Scientific Interest and several Important Bird Areas.

The Nature Conservancy of Canada (NCC), along with our partners, have conserved 344 hectares (855 acres) in the Essex area since beginning our work here in 2000. Of that, 130 hectares (321 acres) have been restored to natural habitat.

In 2018, we ramped up our work in the area by opening a new office in southwest Windsor and hired a dedicated conservation coordinator for the area. Today we are making considerable progress toward building partnerships and determining what additional conservation tools we might be able to bring to this agricultural heartland.

Looking ahead, we are concentrating our conservation efforts in four areas: the Ojibway prairie complex, Big Creek, Lebo Creek and Cedar Creek. Developing and maintaining successful, mutually beneficial partnerships with local conservation organizations, landowners and residents is our top priority.

Nutrients like phosphorus and nitrogen from human land uses are accumulating in streams and rivers and ending up in Lake Erie. These excess nutrients are contributing to algal blooms, which can turn toxic and threaten the drinking water for 11 million people. Phosphorus is considered the main cause of these blooms, but climate change is also contributing to the problem by increasing the frequency of extreme storm events. These events can erode more soil and move more nutrients from the land to the lake.

One of the aims of NCC’s work in the Lake Erie area is to encourage conservation practices that will increase the amount of available habitat for rare and endangered species while mitigating the impacts of climate change. Restoring natural habitats, such as wetlands, floodplains and along waterways, will help reduce phosphorus-laced runoff and help keep nutrients where they belong: on the fields, making healthy crops. NCC is looking for opportunities to work with rural landowners who are interested in conservation and building climate change resilience to create buffers between fields and water.

The Essex region’s landscape has a long history of agriculture, and it has been a key area for manufacturing. Its proximity to Lake Erie, as well as the Detroit River, Lake St. Clair and the American border, has long made it an important development hub for Ontario.

Fields, greenhouses and wind farms now dot a landscape that was once forest and wetland. Fortunately, there are still pockets of natural habitat remaining, which support populations of remarkably resilient species in Ontario.

The conservation of Essex Forests and Wetlands Natural Area is not something we can achieve on our own. Only through strong partnerships can this unique area continue to grow and thrive. NCC would like to thank the following partners for their generous support of our ongoing efforts in this natural area:

Please consider a gift to help protect and care for the Essex Forests and Wetlands Natural Area.