If you look at a photo from space of northeastern North America at night, you see the lights of cities, towns and highways spreading like a constellation across the landscape. Yet just north of Kingston and northeast of the St. Lawrence River is an archipelago of countryside and wilderness blanketed under dark skies and bright stars.

This is the beautiful Frontenac Arch Natural Area; quintessential Ontario wilderness in eastern Ontario. Made up of a unique blend of forests, wetlands and lakes, this area provides habitat for thousands of species.

With over 72 per cent forest cover, the Arch is one of the most important forest corridors in North America. It forms a critical habitat linkage between the northern hardwood and mixed forests in the Algonquin Highlands of Ontario and the Appalachian Mountain chain of eastern North America.

This 171,000-hectare (423,000-acre) natural area brings together northern Canadian Shield forests with southern Carolinian influences and fosters a diversity of plant, insect and animal species. Many of these species are at risk and globally rare. The Arch serves as a funnel for migrating birds, bats and insects, as well as animals with large home ranges, such as fisher, black bear, moose and eastern wolf.

Due to its incredibly rich natural environment and history, the Frontenac Arch was recognized as a UNESCO World Biosphere Reserve in 2002. The Arch is bisected by the Rideau Canal, Ontario’s only UNESCO World Heritage Site, and includes the world-famous Thousand Islands area of the St. Lawrence River.

The Nature Conservancy of Canada (NCC) has been working in the Frontenac Arch for over 20 years to secure key properties and assist partners in their conservation efforts. NCC currently owns and manages over 2,760 hectares (6,835 acres) and has assisted with the protection of an additional 2,985 hectares (7,376 acres) of habitat.

Eleven per cent of the Frontenac Arch is currently protected for conservation by the federal or provincial governments, conservation authorities and local land trusts. NCC’s long-term vision for the area is to help create a connected mosaic of protected lands across the Arch with at least 17 per cent under some form of conservation protection. 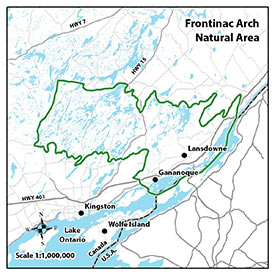 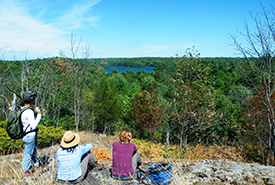 Many people visit this rich wilderness landscape for recreational activities. However, expanding development, new and wider roads and resource extraction put the Arch at risk due to habitat loss and fragmentation. NCC is committed to partnerships and long-term planning so that this unique habitat can be conserved in balance with recreation and other land uses.

Invasive species threaten habitat here as they do across many natural areas. Eradicating these species, which crowd out native plants and alter habitat, is one of NCC’s goals for the area. Each year, NCC staff, partners and volunteers work hard in the forests, wetlands and lakes of the Arch, removing species such as dog-strangling vine, European buckthorn and phragmites. NCC also promotes awareness through workshops and the media to encourage the public to help reduce the spread of invasive species. 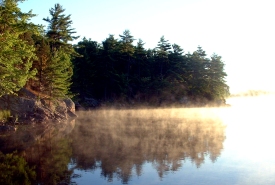 This landscape has a long history, both human and natural. The Frontenac Arch is on the traditional territories of the Anishinaabe and Haudenosaunee. After the War of Independence and War of 1812, this was one of the first places settled by early Empire Loyalists. During this time, many Indigenous Peoples relocated to the Frontenac Arch from other areas due to the upheaval brought about by war.

With gratitude and respect, we acknowledge the significant contributions Indigenous Peoples have made, and continue to make, on these lands. A variety of economic activity has occurred here over the last few hundred years, including fur trading, agriculture, logging, milling and mining. Later, the region and its beautiful landscapes became a destination for cottages and summer homes in the early 20th century. Today there is a growing trend of the development of estate homes rather than cottages. A resident population has been gradually replacing the cottage population.

The protection of the Frontenac Arch is not something we can achieve on our own. Only through strong partnerships can this unique area continue to grow and thrive. NCC thanks the following key conservation partners for their generous support of our ongoing efforts in this natural area:

NCC also has an ongoing partnership in the area with Parks Canada. In 2005, NCC helped expand the Thousand Islands National Park  to 2,400 hectares (5,930 acres), doubling the size of the park.