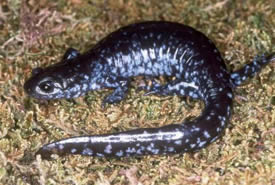 Small-mouthed and blue-spotted salamanders are part of a group called mole salamanders, as they spend most of their adult lives underground in burrows. Mole salamanders are only found in North America. They come out at night to hunt insects, slugs and worms. They may make their own burrows, but often share burrows made by chimney crayfish. You can spot these burrows by looking for the “chimneys” — blobby tubes of mud sticking out of the ground, often in damp areas. Chimney crayfish are also nocturnal and appear to share their burrows with salamanders quite happily. 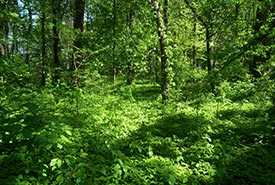 Salamanders look like lizards, but are amphibians that, like frogs, undergo metamorphosis. Unlike frogs, salamanders mostly live on land. Early in the spring, they emerge from their burrows and make the trek to their breeding ponds. They lay eggs in the water, which hatch into fully aquatic larvae that breathe using gills — feathery appendages that stick out from either side of their heads. As they grow, they absorb the gills and develop lungs, and eventually leave the ponds as juveniles in summer to begin their terrestrial lives. Salamanders can also breathe through their skin, which is very delicate and must remain moist. This permeable skin means they are very sensitive to pollution and toxic chemicals.

The bizarre and unique world of mole salamander reproduction 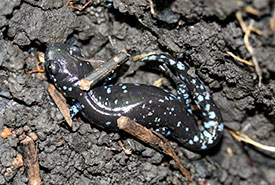 As with most salamanders, during breeding, males lay out their sperm in packets for the females to find and then use it to fertilize their eggs.

To understand how unisexual salamanders work, think of a genome (all of an organism’s genetic material) as a pie. In most vertebrates, each individual has one pie and when they reproduce, the pies from the mother and father are cut in half, then stuck together so that the offspring have a whole pie that is half from the mother, half from the father. The offspring might be male or female.

This is apparently a very successful strategy, because unisexual salamanders have been around for a very long time (3 to 4 million years), while most unisexual lineages in other species die out quickly. As far as we know, these mole salamanders in the Great Lakes region are the only animals in the world to reproduce like this.

Threats to salamanders on Pelee Island

Salamanders need moist, forested habitat and breeding ponds. The Nature Conservancy of Canada (NCC) and other conservation organizations, including Ontario Parks, Ontario Nature and Essex Region Conservation Authority, have protected much of the remaining habitat on Pelee Island, but these areas are isolated from each other. 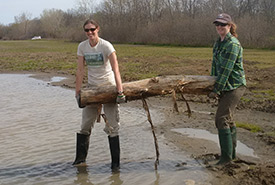 In the late 1800s, Pelee Island’s wetlands were drained and its forests cleared to make way for agriculture. Today, salamanders living in the remaining pockets of forest are dependent on just a few breeding ponds that are often disconnected from each other. This makes it difficult for these populations to interbreed.

While there are many canals and ditches on Pelee Island, it’s not clear if these are useful for salamanders to breed. The canals have fish in them, which eat salamander eggs and larvae. The canals are also fed by agricultural runoff, which may contain pollutants that are harmful to salamanders.

Small, shaded ponds  that dry up by the end of summer are the most important habitat for salamanders to reproduce, as they do not support fish. These ponds are now few and far between. If a population of salamanders has only one pond in which to breed, they are very vulnerable if something happens to that pond (e.g. if it dries up before the larvae are old enough, there will be no new salamanders that year). 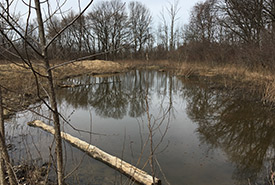 NCC is working with researchers from Trent University to try to bring back some of the forested habitat that salamanders need, as well as create ponds in which they can safely breed. By restoring agricultural fields to forest in key areas and creating ponds at strategic locations, we can connect previously isolated populations, increase their size and help to ensure the long-term survival of small-mouthed salamanders (and their unusual unisexual counterparts) in Canada.

Researchers have been studying the salamanders on Pelee Island for over five years and have discovered that, while there are many present, very few of them are small-mouthed or blue-spotted. The majority are unisexual females. We don’t know if the very high number of unisexuals relative to the other two species is the way it has been for thousands of years, if it is a natural cycle or if it is a recent development caused by human impacts — pollution, habitat fragmentation or climate change. If it is a recent change, reducing human impacts by increasing the amount of forests, ponds and connectivity between populations can only help.

Since 2012, Dispenser Amenities has supported the Nature Conservancy of Canada’s conservation work, and we’d like to thank them for their continued support to further protect and restore important wetland habitat on Pelee Island.

Click here to learn more about our current project on Pelee Island and to make a donation.