The Malbaie Salt Marsh: An exceptional diversity of habitats 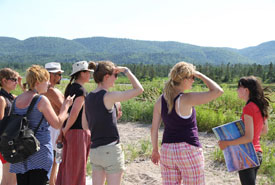 The Nature Conservancy of Canada (NCC) protects close to 200 hectares (490 acres) of natural area in the Malbaie Salt Marsh on the shores of the Gulf of St. Lawrence. Located in the Gaspé Peninsula, between Percé and Gaspé, the Malbaie Salt Marsh features salt and freshwater marshes, coastal forests, a bog and beaches — habitats that are essential to several hundred animal and plant species.

There are about 15 salt marshes along the Gaspé coast. Spread over 10 square kilometres, the Malbaie Salt Marsh is one of the largest intact natural lagoons in Quebec. A salt marsh (“barachois”), or lagoon, is a body of water separated from the sea by a spit (a thin strip of sand or gravel). This spit protects the salt marsh’s fragile natural environment from the turbulent waters of the Gulf of St. Lawrence. Vegetation that grows there, including beachgrass and sand ryegrass, ensures the spit's stability.

At high tide, a lower section of the spit allows seawater to enter the inland water body, mixing with fresh water from upstream rivers. The variation in salinity caused by this mixing allows for a wide variety of habitats.

The Malbaie Salt Marsh sand spit is 5.8 kilometres long, making it the longest in the Gaspé Peninsula!

An essential environment for endangered species

A migratory stopover site for nesting, resting and feeding, the Malbaie Salt Marsh is recognized worldwide for its great ecological wealth. Designated as an Important Bird Area (IBA), this environment is home to more than 240 species of birds, many of which are at risk. Barrow's goldeneye, harlequin duck, bank swallow, red knot, rusty blackbird, olive-sided flycatcher, Canada warbler and short-eared owl are among the rare species that frequent the Malbaie Salt Marsh. During spring and fall migration, large groups of Canada geese and brants stop in the lagoon to feed on eelgrass.

The aquatic environments of the Malbaie Salt Marsh also provide high-quality habitat for a great diversity of fish to feed, grow and reproduce. In particular, these environments are a spawning, or breeding, ground for Atlantic salmon on their run up the Malbaie River.

Don’t just take our word for it; go discover this beautiful place for yourself! The Malbaie Salt Marsh’s spectacular scenery and location on the shores of the Gulf of St. Lawrence make it a very popular place for recreational activities, such as hiking, birdwatching and biking. It is also recognized by fishing enthusiasts as one of the best places to fish for striped bass in Quebec. Nature lovers can check out the information centre and the marked trail in the heart of the Malbaie Salt Marsh.

The Nature Conservancy of Canada would like to thank the following donors without whom the protection of this property would not have been possible: the Ministère de l'Environnement et de la Lutte contre les changements climatiques through the Ensemble pour la nature project, the Government of Canada through the Natural Areas Conservation Program, the North American Wetlands Conservation Act, administered by the U.S. Fish and Wildlife Service, and the Fondation de la faune du Québec.